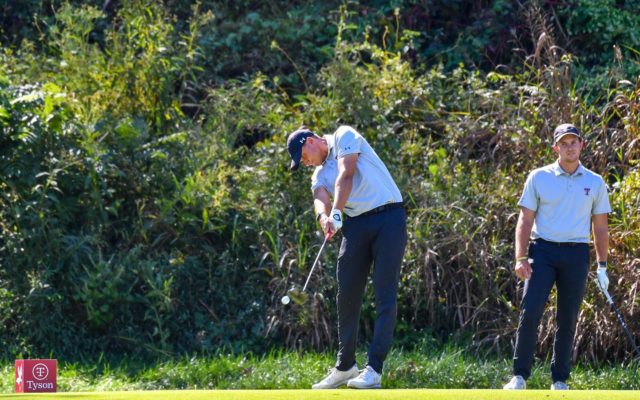 The No. 9-ranked Red Raiders finished the tournament at 3-over-par and in seventh place after posting rounds of 289-292-286 during their three days in Arkansas. TTU was 2-under in its final round for its lowest scorecard of the 54-hole event. The Razorbacks won their home event by shooting 18-under followed by Arizona (-5) and Mississippi (-3) in the 10-team event. Luke Long (Arkansas) won the individual title at 11-under.

Aberg led the Red Raiders by shooting 3-under after posting a final round of 2-under on Tuesday. His three-day scorecard of 72-71-70 – 213 was completed with six birdies in his final round and a tournament leading 19 for the week. At No. 3 in the World Amateur Golf Ranking, Aberg secured his first top-10 finish of his junior season after having eight top-10s during his all-America sophomore season.

Calum Scott secured his best finish of his young career by shooting 1-over for the tournament after posting a final round 2-under70. A freshman from Scotland, Scott finished 18 after opening his career with a 20th place showing at The Carmel Cup. Scott had five birdies in his final round. Baard Skogen finished the tournament at 4-over after entering the final round at even par, while Kyle Hogan shot 5-over for the week. Skogen, who was coming off a runner-up finish at the Maridoe posted a 71-73-76 – 220 scorecard and Hogan recorded 72-75-74 – 221. Skogen finished 22nd and Hogan 25th in the 51-player tournament.

Garrett Martin shot an even-par, 72 on Tuesday in his final round to finish at 12-over for the tournament.