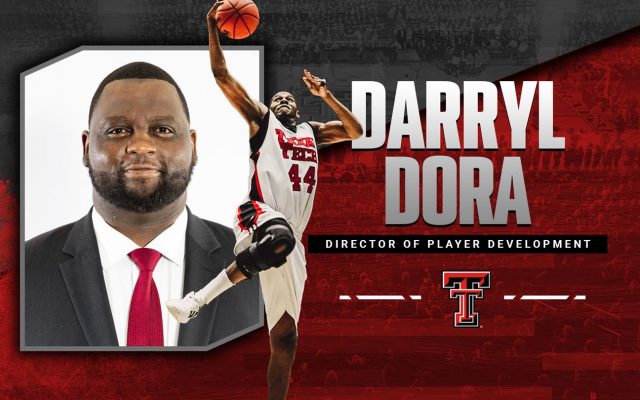 LUBBOCK, Texas – Darryl Dora is back at Texas Tech where he will serve as the Men’s Basketball Director of Player Development, head coach Mark Adams officially announced on Friday. Dora played for the Red Raiders under legendary head coach Bob Knight and returned to TTU as a graduate assistant before working the past two seasons as an assistant coach at Austin Peay University.

“My family and I couldn’t be more excited about being back at Texas Tech and having this opportunity to work with Coach Adams and our players,” Dora said. “Working directly with the guys in a role where I can help them become successful is what I really like. I see myself as a big brother and mentor to them, but I will also keep them accountable and push them to become better. There’s some hard love there because I’ve been in their position before and know what it takes to be successful.”

Adams added: “Darryl is a great addition to our program. He has experience as a player here at Texas Tech and also professionally. I trust him and he does a great job of developing trust with each player he works with. His connection to past players is also very important to us as we continue building our program.”

Dora played for Knight at Texas Tech from 2004-07 before pursuing a professional that began in France and came to an end with the Miyazaki Shining Suns from 2011-13 in Japan. A Gonzales, Texas native, Dora graduated with a bachelor’s degree in human sciences from TTU in 2016 and earned his master’s degree from the University in interdisciplinary studies in 2019. In his first return to the Tech basketball program, Dora was a graduate assistant for player development from 2016-19 where he helped the program reach the 2018 Elite 8 and 2019 NCAA National Championship Final.

“This is home for me and a place I want to be,” Dora said. “Working with Coach Adams and the staff he’s putting together is a great opportunity. The people of Lubbock and West Texas took care of me from the first day I got here to play and over the years. I’ve had so many opportunities at Texas Tech as an athlete and now as a coach. I owe this place everything and I’m back here to help keep it going.”

At Austin Peay, Dora worked two seasons under head coach Matt Figger who recently accepted the same position at Texas-Rio Grande Valley. Dora was responsible for recruiting, coaching, scheduling and film study for the Governors who had two winning seasons with him on the coaching staff. Dora helped Terry Taylor develop into a two-time Ohio Valley Conference Player of the Year selection.

Before accepting his first full-time coaching role at Austin Peay, Dora was an integral part of the most historic seasons in Texas Tech history as a graduate assistant. Along with team success of advancing to the Elite 8 for the first time ever in 2018 and to then the 2019 Final Four, Dora helped the rapid progression of Zhaire Smith and Jarrett Culver who would become first-round selections in the NBA Draft. Dora also helped numerous other Red Raiders develop while at Tech and pursue professional careers in the G-League and overseas. Smith was selected No. 16 overall in 2018 after his freshman season, while Culver became a 2019 NBA lottery pick at No. 6 following his all-American sophomore campaign.

Dora played four seasons at Tech during his collegiate career where he averaged 5.4 points and 3.5 rebounds per game in 129 games played. He led the Red Raiders in blocked shots as a senior with 16 and finished his career with 52 blocks. As a junior in 2005-06, he scored a career-best 7.6 points per game in a season where he started 26 of 30 games. Dora finished his career with 111 assists in Big 12 games which is the 10th most in program history.

Dora helped lead the Red Raiders to the 2005 Sweet 16 with wins over UCLA and Gonzaga in the NCAA Tournament to set up a matchup against West Virginia. He would score 10 points with eight coming in the second half for the Red Raiders in the win over Gonzaga. In the regular season, Dora hit one of the most iconic shots in Texas Tech basketball history with a 3-pointer with 3.6 seconds remaining to lift the Red Raiders to an 80-79 double-overtime win over No. 2-ranked Kansas on Feb. 14, 2005 in Lubbock.
As a freshman, Dora recorded a double-double with 12 points and 10 rebounds in a 76-63 win over Charlotte in the NCAA Tournament first round in Buffalo, New York. His NCAA Tournament double-double is one of only 13 in Tech history and came in a game where he also had six assists. Dora came to Lubbock after being a two-time all-state selection at Gonzales HS.