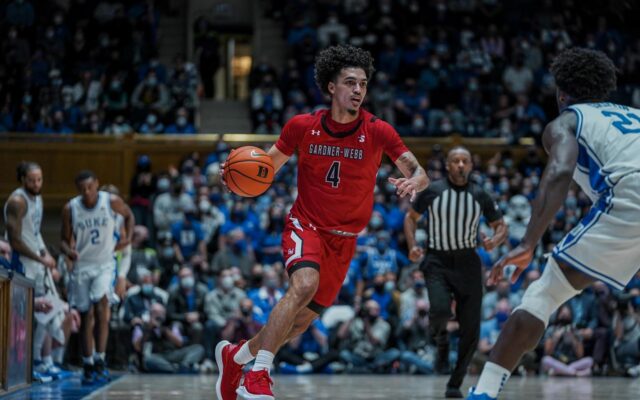 LUBBOCK, Texas – Texas Tech head coach Mark Adams has officially announced the signing of D’Maurian Williams to a financial aid agreement. Williams has played the past two seasons at Gardner-Webb University where he scored 731 points along with producing 131 assists and 57 steals. He transfers to Tech with three seasons of eligibility remaining.

A 6-foot-5 guard from Phoenix, Arizona, Williams arrives in Lubbock after a sophomore season where he averaged 14.5 points, 4.6 rebounds, 2.5 assists and 0.9 steals per game. He earned All-Big South Conference Second Team honors after producing 24 double-figure scoring performances, including scoring 20 or more in eight games. He went for 21 points at UNLV in the season-opener, had a season-high 27 points against Columbia International in mid-November and finished his career at Gardner-Webb by scoring 22 points against Winthrop in the Big South Championship semifinals. He completed the season shooting 79-for-201 (39.3 percent) on 3-pointers with 17 games with three or more 3-pointers, including a season-best six 3-pointers in a 25-point performance against Western Carolina.

Williams also earned All-Freshman Big South Conference honors in his first season at Gardner-Webb where he averaged 10.8 points and 2.0 assists per game. He scored a freshman-season high with 21 points against Charleston Southern. He had 14 games in double figures in a 26-game season in 2020-21 and had eight games with three or more assists.

Williams graduated from Westview High School (Arizona) where he scored 1,519 points in his career. He earned All-State honors after averaging 21.6 points, 6.7 rebounds and 3.8 assists during his senior season. Williams would then play one year at Putnam Science Academy in Connecticut following high school. He helped the program win the 2020 Prep School National Championship in a season where averaged 10.8 points and 5.0 assists per game.

Williams is the first player from the transfer portal to sign with the Red Raiders in the offseason and becomes the fifth in the signing class that includes Jaylon Tyson, Richard Isaacs, Robert Jennings II and Lamar Washington. The Red Raiders are coming off a 27-10 record last season and advanced to the NCAA Sweet 16 for the third time in the past four tournament. Tech went 18-0 at home and reached the Big 12 Championship finals for the second time in program history before knocking off Montana State and Notre Dame in the tournament.