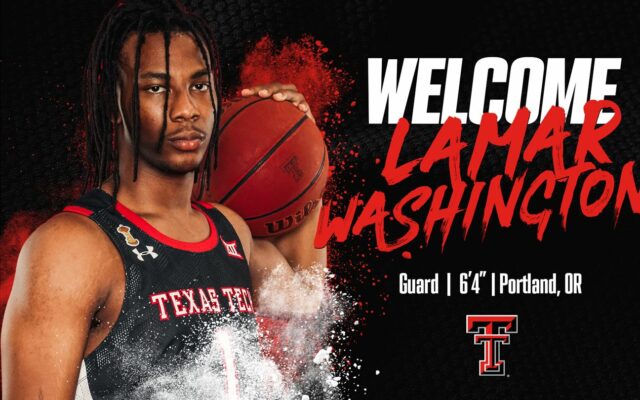 LUBBOCK, Texas – Texas Tech head coach Mark Adams has announced the signing of Lamar Washington who was named the 2021 Oregon Gatorade Player of the Year to his national letter of intent for the 2022-23 academic year.

A Portland, Oregon native and ESPN 4-star recruit, Washington is coming off a junior season where he averaged 31.2 points, 10.3 rebounds and 5.1 assists per game at Jefferson High School. A 6-foot-4 hybrid guard, he will play his senior season at Arizona Compass Prep School before enrolling at Texas Tech.

“They have a family feel environment where everyone seems invested in the program and in the success of others,” said Washington of his decision to sign with the Red Raiders. “I loved the campus and the facilities as well as the education I can get. I’ve bonded with the staff on my visit and their follow through after my visit is second-to-none. The staff will allow me to set goals to keep me on track of playing in the league. At Texas Tech I can grow on and off the court.”