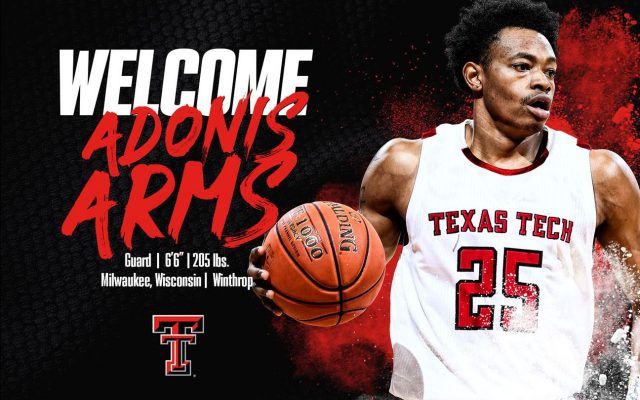 LUBBOCK, Texas – Texas Tech head coach Mark Adams has announced the addition of Adonis Arms to the Red Raider men’s basketball roster after he officially signed a financial aid agreement with the program on Monday. Arms is a 6-foot-6 guard who is transferring from Winthrop University with one year of eligibility remaining.

A Milwaukee, Wisconsin native, Arms averaged 10.4 points and 4.5 rebounds per game for the Eagles through 22 games played last season including going for 10 points against Villanova in the first round of the NCAA Tournament.

“I want to first thank God for the opportunity to play in the Big 12 at Tech with its great fans who always show support,” Arms said. “I want to thank my family as well for being the best support system ever. I see myself as a versatile player so I can help anywhere.”

Arms scored in double figures 13 times last season with a season-high of 17 coming twice, first against USC Upstate where he hit three 3-pointers in December and then again against Garner-Webb in January where he was 4-for-5 from beyond the arc. Playing as a reserve in his 22 game for the Eagles who went 23-2 including winning the Big South Tournament championship, Arms had seven performances with two or more 3-pointers last season where he shot 34.2 percent (25-for-73). He would also contribute 37 assists and 19 steals.

Arms was at Winthrop for two seasons, playing last year after redshirting the 2019-20 season following a transfer from Northwest Nazarene University where he earned the 2019 Great Northwest Athletic Conference Player of the Year and GNAC Newcomer of the Year. Arms averaged 20.6 ppg., 5.4 rpg. and 3.3 assists per game for the Nighthawks who went 20-8 that season. He led the Great Northwest Athletic Conference with 1.9 steals per game with a season-high three steals against USC Upstate. Scoring a career-high 34 points came in a win over Western Washington where he went 11-for-17 from the field, 9-for-11 from the free-throw line and included hitting three 3-pointers. Arms started all 28 games that season for the Nighthawks and scored in double figures in each. He would score 30 or more three times and 20 or more in 14.

Beginning his collegiate career at Mesa Community College in Arizona, Arms played two seasons for the Thunderbirds before transferring to Northwest Nazarene. At MCC, Arms averaged double-figure scoring as a freshman with 10.4 ppg. before scoring 13.3 ppg. as a sophomore in the 2017-18 season. He was named the MCC team MVP and also secured second team all-conference and third team all-region honors.

Arms joins the Texas Tech basketball program that has established a new program record by advancing to three straight NCAA Tournaments, including reaching the 2018 Elite 8 and 2019 NCAA National Championship Final.