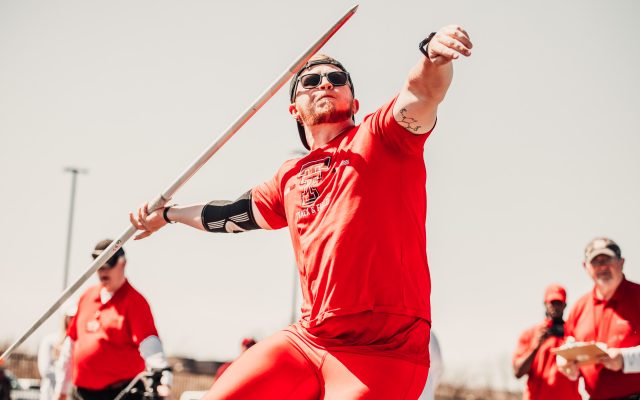 Jacolby Shelton and Courtney Lindsey made their highly-anticipated outdoor debut in their individual events, joined by Karayme Bartley running his first 200m. Bartley highlighted the day, bursting out for an NCAA 10th-best 20.42 in his first outdoor 200m in two years. It was a lifetime best for Bartley.

Lindsey, running his opening 200m as well, clocked 20.56 for the 19th-fastest in the country this season.

Twenty-four hours after throwing the third-best discus mark of his career, Gabe Oladipo came within one centimeter of the school’s hammer throw record. At 206’-10” (63.04m), he came just one centimeter from Kole Weldon’s program mark set at the Big 12 Championships in 2015.

Prior to his near-record hammer performance, Oladipo landed an outdoor PR in the shot put. Oladipo’s mark came in at 57’-7” (17.55m). The women’s shot belonged to Kayli Johnson, who despite the small field picked up her first outdoor shot put win as a Red Raider. Johnson’s mark landed at 51’-2.75” (15.61m).

Ruth Usoro’s Bowerman watchlist-worthy season continued Saturday with another 21-foot performance. Usoro’s top jump Saturday was 21’-10.75” (6.67m). Usoro has jumped 21 feet in each meet this season with the exception of the Texas Relays, where her monstrous 22’-2.25” (6.76m) made her the first in school history to jump farther than 22 feet.

Despite a tough unattached indoor and rough start outdoor for Chinne Okoronkwo in the pole vault, Saturday proved a big step for the reigning Big 12 Outdoor champion in the event. Okoronkwo cleared a top height of 14’-0” (4.27m), ranking her 11th in the NCAA this year. It was her first 14-foot clearance since the day she won the Big 12 Indoor title in February of last year.

Clark Griffith made his return to an outdoor sand pit at the meet – an encouraging moment for the senior who has not competed outdoors since 2018. Griffith made the most of his first long jump competition in three years, landing a top jump of 24’-11.25” (7.60m). It was a lifetime best – indoor or out – by well over a foot.

Next for the Red Raiders is the Corky/Crofoot Shootout, which will take place April 30-May 1. The meet will serve as Senior Day for Tech’s graduating student-athletes.