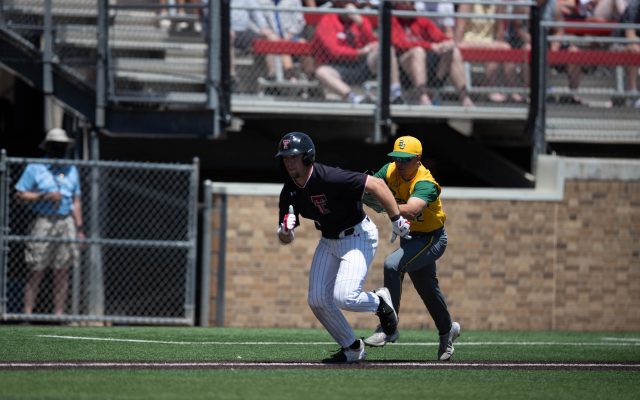 LUBBOCK, Texas – Baylor connected on a pair of solo home runs in the opening inning and broke the game open with a five-spot in the seventh to take the series from No. 5 Texas Tech Sunday after a 13-3 victory inside Dan Law Field at Rip Griffin Park.

The series win marked Baylor’s first in Lubbock since the 2010 season and the first Big 12 series loss at home for the Red Raiders since 2018. This season, Tech had previously overcome a Friday night loss to win series against Oklahoma State and TCU.

“It’s really hard to get these guys to look back and reflect until something like this happens,” head coach Tim Tadlock said. “What you hope is, when you lose a series, that they try to figure out exactly who they are individually and as a team.”

Baylor (26-13; 7-8) jumped out to an early lead following a pair of two-out solo blasts from Tre Richardson and Andy Thomas in the opening frame. The Bears had three home runs in the win as Cade Currington also went deep in the fourth to give Baylor a 3-0 lead.

The Bears built a four-run lead before the Red Raiders (27-10; 8-7) could create any offense of their own as Cal Conley put Tech on the board in the sixth with a solo home run to left field. It was his eighth home run of the season for Conley and one of seven hits for the Red Raiders off the Bears’ pitching staff.

Conley finished 2-for-4 and scored on a wild pitch in the eighth as he was one of three Red Raiders with multi-hit performances as Jace Jung was 2-for-5 overall, while Braxton Fulford was 2-for-4 on the day. Jung drove home Tech’s only other run of the day with a RBI double down the right field line in the seventh.

Baylor starter Blake Helton (3-2) blanked the Red Raiders through five innings, allowing only three hits while striking out two to earn the win. Jacob Ashkinos surrendered three runs off four hits in 2.1 innings of relief, while Luke Boyd closed it out with a scoreless final 1.2 innings.

Tech starter Mason Montgomery (2-2) took the loss for the Red Raiders after giving up four runs off six hits, while striking out eight in 5.2 innings. Baylor combined to score nine runs off the Tech bullpen, with five coming in the seventh, one in the eighth and three more in the ninth.