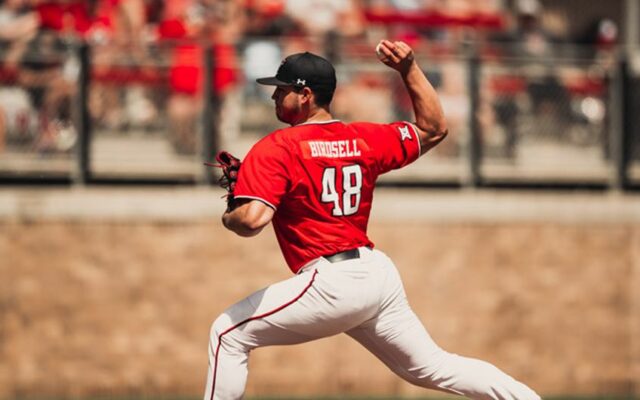 LUBBOCK, Texas – Behind two complete games from Texas Tech starting pitchers Andrew Morris and Brandon Birdsell, No. 9 Texas Tech swept Saturday’s doubleheader against West Virginia, 7-5 and 12-2, at Rip Griffin Park. The latter of the two ended in eight innings due to the Big 12’s 10-run run-rule that’s instituted for the second game of doubleheaders.

Morris led the Red Raiders to the 7-5 game one win while Birdsell went the distance, but in the shortened game, for the 12-2 win that clinched the series against the Mountaineers. Tech has won four of its first five Big 12 series.

During Saturday’s first game, West Virginia jumped out to a 5-1 lead behind a four-run top of the third that was spurred by one hit and a couple of Red Raider errors. Tech responded with a five-run home half to retake the lead and never trailed again on Saturday. From the bottom of the third inning of game one to the top of the eighth in the second game, the Red Raiders poured on 12 runs while holding West Virginia scoreless.

The Mountaineers registered two runs in the top of the eighth against Birdsell to end the 12-run unanswered streak, albeit both were unearned runs. In total, of West Virginia’s seven runs scored on Saturday, two were earned (against Morris).

Ty Coleman led Texas Tech with five hits, going 2-for-4 in game one and 3-for-5 in game two. Kurt Wilson had three hits but led the Red Raiders with five RBIs in the two contests as he homered once in each game.

The first home run was a part of the spark in the third inning of game one that helped Texas Tech reclaim the momentum. His three-run blast (watch) tied the game while Hudson White hit a run-scoring single (watch) later in the frame to give Tech the lead.

Tech is now 20-1 at home this season. It is the eighth-straight season that Tech has won at least 20 games at home in a season.

Quotable
Head Coach Tim Tadlock
On Andrew Morris…
“He really went out there and set the tone for the day. He attacked the strike zone, really did a good job. He’s very resilient, there’s not a lot of amateur pitchers that go through what we went through there in the first two or three innings, and keep pitching, but he did exactly that. I’m really proud of him.”

On Brandon Birdsell…
“He went out and set the tone in that second game by pounding the ball in there and letting some defense play behind him. There’s really no doubt that these guys were going to play nine innings, on both sides. I’ve never had two guys with that kind of stuff throw back-to-back games.”

On winning at home…
“We have always embraced that we will play anybody anywhere, at any time. We’re going to keep doing that, we’re not going to look at it like “here’s your record here” and “here’s your record there”, we’re going to try to play baseball the right way. We have run into some good teams on the road and some teams have beat us on the road, but we’ve also beat some good teams on the road. When we’ve played good baseball we have taken care of what we need to take care of. I’m not going to look at it from the negative side of it. The guys really came out today and were very resilient. They came out and played the game hard, played the game you’re supposed to play… I really liked the way they attacked the game today.”

Up Next
The Red Raiders close their series versus West Virginia on Sunday with the first pitch at 1 p.m. Tech will seek its second straight Big 12 series sweep at home after sweeping Kansas State earlier this month.