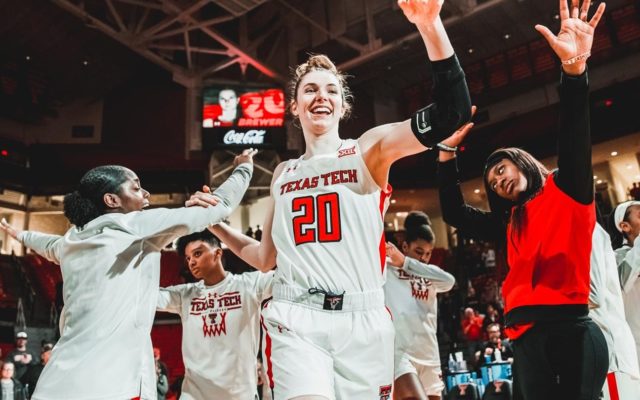 LUBBOCK, Texas – Lady Raider senior Brittany Brewer has been named one of 10 semifinalists for the 2020 Naismith Women’s Defensive Player of the Year Award, the Atlanta Tipoff Club announced on Tuesday.

Over her last eight games, Brewer has recorded five double-doubles, and is up to 13 for the season—already matching her 2018-19 total. The senior has blocked five or more shots in 12 games this year and has already broken the program record for blocks in a season with 111 through 25 games.

Against Louisiana-Monroe in December, Brewer tied the NCAA single game blocks record with 16 in a 12-point, 14-rebound, 16-block triple-double.

The recognition is the latest in a year full of national awards and accolades, as Brewer was named a Lisa Leslie Award top-ten finalist earlier this month, and was named to the Naismith Player of the Year Award preseason watch list. The senior was a Preseason All-Big 12 selection heading into the season, and was named a CoSIDA Academic All-District selection for the third-straight year last week.

Brewer is one of three Big 12 players to make the cut, with Lauren Cox (Baylor) and DiDi Richards (Baylor) also making the list. The finalists for the defensive award will be revealed on March 13. The winner of the 2020 Naismith Women’s Defensive Player of the Year will be announced on April 4.

Brewer and the Lady Raiders look to stay hot as they wrap up their Big 12 road trip on Wednesday against Oklahoma State at 7 p.m.