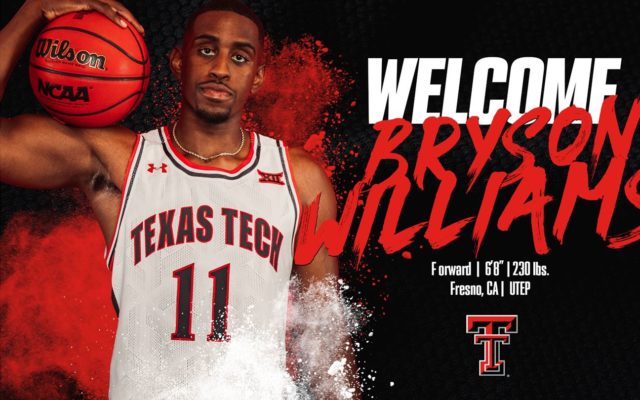 LUBBOCK, Texas – Texas Tech head coach Mark Adams has officially announced the signing of Bryson Williams who transfers in after beginning his collegiate career at UTEP and Fresno State. A Fresno, California native, Williams has one year of eligibility remaining and arrives in Lubbock having scored 1,627 points and with 745 rebounds in his career.

“I can immediately bring in scoring and rebounding to help the team win,” said Williams who is coming off a season at UTEP where he averaged 15.1 points and 7.4 rebounds per game. “I’m a good shooter and can get baskets in the post. I have a big motor and give it everything I can every day. Defense is a big area of improvement that I want to make in my game and I know that Coach Adams is a defensive guru who can help me. To play on this big stage and improve my game was important to me.”

Williams earned NABC All-District Second Team honors as a redshirt senior after earning NABC All-District First team the year before. Along with the All-District honors, Williams was named 2020 All-Conference USA First Team after being tabbed the Conference USA Player of the Week three times. A 6-foot-8, 230-pound forward, he has also posted three C-USA Commissioner’s Academic Honor Roll on his resume.

Along with his 15.1 points and 7.4 rebounds per game, Williams had 12 blocked shots and shot 48.1 percent from the field last season where he started all 24 games for the Miners. He made 19 3-pointers and was 61-for-73 from the free-throw line (83.6 percent). As a junior, Williams led UTEP with 17.8 points and 7.2 rebounds per game during the 2019-20 season in 32 starts. He shot 49.9 percent from the field and had 29 blocks and 28 steals defensively. Williams scored a career-high 34 points against UTSA as a junior against UTSA and had 14 rebounds against Charlotte last season.

Before UTEP, Williams played two seasons at Fresno State where he averaged 14 points per game as a sophomore and earned 2018 All-Mountain West Third Team honors. Williams recorded two double-doubles while playing for the Bulldogs and scored a season-high 30 points against Cal State Monterey Bay along with a 13-rebound game against CSU Bakersfield. He started 58 games in his first two collegiate seasons at Fresno.

Williams is the all-time leading scorer at Roosevelt High School (Fresno) where he finished his career with 2,302 points. He averaged 34 points and 18 rebounds per game during his senior season before signing to play at Fresno State.

He arrives in Lubbock having played in 121 games and with 114 starts in his collegiate career where he is averaging 13.4 points and 6.2 rebounds per game.