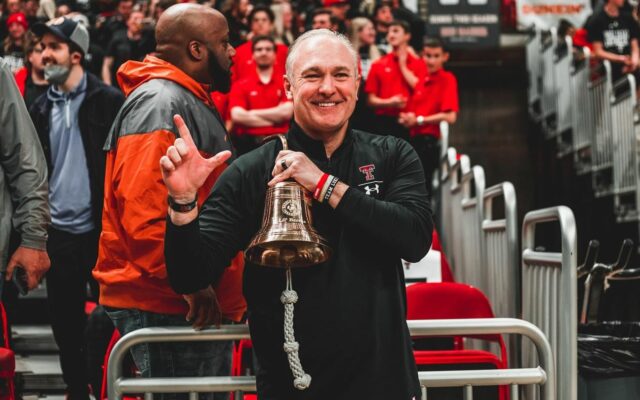 LUBBOCK, Texas – Texas Tech head coach Joey McGuire announced the completion of his charter coaching staff Wednesday with the hiring of C.J. Ah You as the Red Raiders’ new outside linebackers coach.

“We’re excited how this staff came together with Coach Ah You being the final piece,” McGuire said. “To coach at Texas Tech, you have to possess the passion to inspire and build relationships with our players, and that describes Coach Ah You perfectly. We’re excited to welcome him and his wonderful family to our Red Raider family.”

Ah You’s hiring marks his return to the Big 12 Conference where he previously starred at Oklahoma from 2005-06 before enjoying a six-year NFL career with the St. Louis Rams. Ah You, who began his college career at BYU before transferring to Snow College and then Oklahoma, was the Big 12 Defensive Newcomer of the Year as a junior in 2005 and garnered All-Big 12 first team honors a year later.

The St. Louis Rams selected Ah You in the seventh round of the 2007 NFL Draft after he started in 21 of 26 games as a Sooner where he recorded 88 tackles, including 22.0 for a loss, 11.0 sacks and four forced fumbles.

After completing his tenure with the Rams, Ah You immediately joined the coaching professional, returning to his alma mater as a defensive quality control assistant for the Sooners during the 2014-15 seasons. Oklahoma played in the Russell Athletic Bowl his first year on staff before qualifying for the College Football Playoff in 2015 after the Sooners won the Big 12 title.

His success in helping develop the Oklahoma front paved the way for his first full-time coaching position at Vanderbilt in 2016 where he enjoyed a three-year stint at the Commodores’ defensive line coach. Vanderbilt experienced two bowl trips during his tenure, playing in the 2016 Independence Bowl and then the 2018 Texas Bowl.

From there, Ah You moved to the professional ranks, joining the resurrected XFL in 2019 to serve as the defensive line coach for the New York Guardians. He later served a minority coaching internship with the Los Angeles Chargers in the summer of 2020 after the XFL’s lone season was canceled earlier that spring due to the start of the COVID-19 pandemic.

Ah You returned to the college ranks a year ago to accept a defensive quality control analyst position at USC. He had previously been named the defensive line coach at Nevada prior to his hire with the Red Raiders.

Ah You hails from a football family as his father, Charles Sr., and brother, Matt, both played football collegiately at BYU. His family’s ties to BYU also include his nephew Chaz Ah You, who is a senior linebacker with the Cougars, as well as his cousins, Kingsley (1992-93) and Harland (1995-97) Ah You, both former letterwinners.

His brother, Jasen, is currently the executive coordinator of recruiting and player personnel on the BYU football staff. His uncle, Junior Ah You, also played collegiately at Arizona (1969-71) before starring in the USFL and the Canadian Football League.

Prior to beginning his professional career, Ah You earned his bachelor’s degree in sociology from Oklahoma in 2006. He and his wife, Chynea, are parents to four daughters, Makiah, Atiana, Alei’a and Milani.

Ah You replaced DeAndre Smith on the Texas Tech staff after he resigned a week ago to accept the running backs coach position with the New York Giants in the NFL.