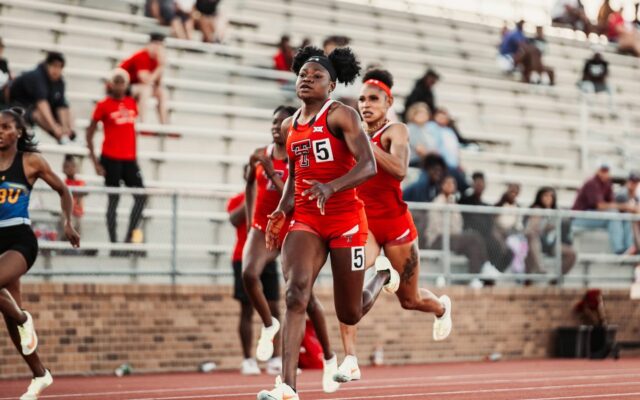 LUBBOCK, TEXAS – The Texas Tech track and field program closed out its regular season Saturday, when they hosted the Corky/Crofoot Shootout at the Fuller Track and Field Complex.

Prior to the conclusion of the two-day meet, Texas Tech honored its over 30 seniors for their contributions to the program.

It may have been senior day on Saturday, but on the women’s side of things, it was a sophomore that stole the show, as Nigerian Rosemary Chukwuma set her second school record in just over a month.

Lindsey nearly broke 10.0 in the 100m, while Wall won the pole vault and equaled her career-best mark.

The Texan now owns two of the six-best marks in school history. Wall’s mark of 4.35m is the second-best score in the Big 12 this season trailing just Olivia Lueking (4.45m) of Oklahoma.

A senior from Rhode Island, Lindsey’s time was the fourth-fastest wind legal time in the country this season and the fifth-fastest time in school history.

Tech’s other personal best on the day came from Sylvia Schultz who won the 400 hurdles with a time of 57.51. That mark would have been the ninth-fastest time in the country heading into the weekend and the second-fastest time in the Big 12 this season.

DIRECTOR OF TRACK & FIELD WES KITTLEY:
“It wasn’t a perfect day by any means, but I think we accomplished what we wanted to. We didn’t have everything go perfectly, but I feel like many people sharpened up before conference. We have our finals coming up next week, so our kids are a little bit stressed, and you could see that today. Now we just need to get everyone rested and get the finals out of the way. I thought our sprints were the highlight for me today. Sylvia ran a good 400 hurdles to set a person-best, but the highlight was definitely the men’s 100 and women’s 200m.”

On hosting the 2022 Big 12 Championships:
“Let’s hope we have the same weather conditions that we had today for the Big 12 meet. We’ll be at home where our kids are very comfortable. I always say hosting the meet gives you about five points to start off, so I hope that’s the way it is for us next weekend. We’ll be comfortable and it’ll be very exciting for us to have a conference meet here. It’s been since 2014 that we’ve hosted, so it’s been a while.

UP NEXT:
Texas Tech will take next week of to focus on finals and recovery before the 2022 Big 12 Championships. Tech and the City of Lubbock will play host the 2022 Championships, May 13-15. This marks the first time since 2013-14 that the Big 12s will be held in Lubbock. That year the Tech men finished first, while the women came in third.