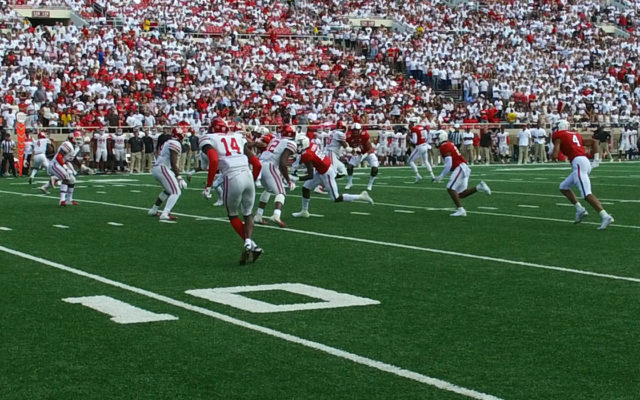 Players Numbering
No more than two Squad Members may be assigned or wear the same jersey number. There were no limits to duplicate numbers in previous seasons. With the recognized popularity of the single digit numbers, the digit “0” is added as a legal number. Any number to be preceded by “0” such as “07” or “00” remains illegal.
Targeting – Disqualified Player
There were no changes to the Targeting rule from an on-field officiating perspective and the rule continues to serve the game well and is changing player behavior in terms of use of the helmet. The change for 2020 is that now a player disqualified for Targeting will be declared ineligible for further participation in the game, but the player may remain in the team area.
All other disqualifying fouls such as Fighting, two Unsportsmanlike Conduct fouls, Flagrant Personal fouls, etc. will be reclassified as fouls requiring ejection. Players ejected will be required to leave the playing enclosure and must remain out of view of the field of play under team supervision.
Pregame Warmup / Officials Jurisdiction
The Rules Committee address issues of Unsportsmanlike behavior in the pregame and took steps to clean this action up. The officials’ jurisdiction will now begin at 90 minutes before kickoff (previously 60 minutes). Additionally, when any Squad Member enters the playing enclosure prior to the game, the head coach or an assistant coach from that team must be present on the field. Furthermore, when any Squad Member is present within the playing enclosure after the officials’ jurisdiction, they must be wearing their jersey or have their numeral readily visible. Players without their numeral readily visible must leave the playing enclosure.
Defensive Linemen on Scrimmage Kick Plays
To further enhance the protection of the snapper on scrimmage kicks, if the offense is in a scrimmage kick formation at the snap, any defensive player within one yard of the line of scrimmage must be aligned completely outside the frame of the body of the snapper at the snap. This change paired with the current rule that does not allow the defense to initiate contact with the snapper until one second has elapsed on these type plays will further protect the snapper on kick downs.
Instant Replay / Clock Adjustment and Review Time
If the clock expires at the end of a half, and replay determines that there was time remaining on the clock, and the clock would start on the Referee’s signal after review, there must be at least 3 seconds remaining when the ball should have been declared dead to restore time to the clock. With 2 seconds or 1 second remaining on the clock, the half is over. This change will not impact situations when the clock is stopped and will remain stopped until the snap such as incomplete passes and runners out of bounds. In addition, the expectation is that the Instant Replay Official will not exceed two minutes to complete any review. The exception is if the review has end of game impact or has multiple aspects as a part of the review, it should be completed efficiently but will have no stated time limit.
Other Changes:

Team Area and Coaching Box
To promote enhanced social distancing, the Team Area will be lengthened from the current configuration between the 25-yard lines and expanded to the 15-yard lines. This will enlarge the Team Area an additional 10 yards on each end of the field, resulting in a 70-yard-wide total team area. Coaches will be encouraged to utilize this 70-yard area to separate all team personnel and not have large groups congregating in a specific area near the ball. In addition, based on social distancing guidelines, Coaches are encouraged to stay out of the Restricted Area and remain in the Coaching Box.
Pregame Toss
Currently the toss rules allow up to four Captains from each team to be present at the toss of the coin. Additionally, there are typically many additional non-essential people present such as honorary captains, media, photographers, sideline radio personnel, etc. The change for 2020 would be to include only one Captain from each team and the Referee and the Umpire. These four individuals are the only essential people that can attend the toss, and these four individuals will be spaced out and will conform to social distancing guidelines.
Uniform Attachment / Medical Mask
A medical mask made of cloth attached to the facemask below the eye shield area will now be allowed. If worn by any squad member of a team, medical masks must be of the same color and design and must be of a solid color with no advertising, slogans, or insignia. The medical mask may bear the team logo.
Playing Rules Changes Related to Commemorative/Memorial Uniform Patches
In an effort to allow student-athletes the opportunity to use the uniform to voice their opinions and/or express support of racial and social justice, PROP voted to direct all playing rules committees to implement the following policies for all sports effective with the 2020-21 seasons:

In response to mitigate the spread of COVID-19, the following officiating protocols will be in place: