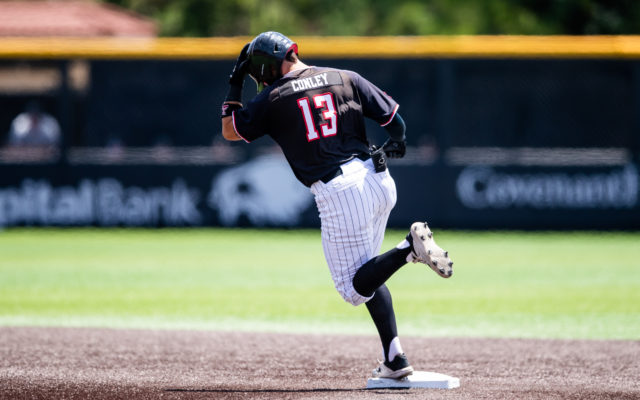 With the win, the Red Raiders (37-15) move into the winner’s side of the regional bracket where Tech will await the winner of tonight’s North Carolina and UCLA game. First pitch between the Tar Heels and Bruins is slated for 6 p.m. this evening on ESPN+.

Conley became only the sixth Red Raider all-time to homer twice in a NCAA Tournament game as he lifted a two-run blast to give the Red Raiders their first lead in the third and then added a solo shot to pad the lead in the fifth. The multi-home run performance was the second of Conley’s career as he finished 2-for-4 overall with three RBI.

Braxton Fulford also found the outskirts of the outfield fence with a two-out, two-run blast in the fourth, giving Hampton a three-run cushion at the time. It was the 14th home run of the season for Fulford, which is one shy now of Conley’s 15 for the year.

Hampton (4-0) previously escaped trouble in the top half of the frame thanks to a diving stop from Parker Kelly at third that turned into an inning-ending double play. The freshman continued strong to close out his day, allowing only a pair of singles in the fifth and sixth before wrapping up the performance with back-to-back strikeouts in the sixth to match his longest outing of the season and get the win.

The right-hander allowed just two runs (one earned) on seven hits with seven strikeouts in tossing 6.0 innings. He gave way to Connor Queen for two innings out of the bullpen and then Micah Dallas for a scoreless ninth. The save was Dallas’ second of the season.

Army’s (28-24) only answer to Hampton was a pair of runs over the first three innings, taking advantage of a two-out RBI drag bunt from Tim Simoes in the opening frame and then a Tech error in the third. Jeremiah Adams connected on a solo home run in the seventh to round out Army’s day at the plate.

Kelly matched Army’s run in the first with a RBI double an inning later to score Easton Murrell. Army starter Anthony Loricco (4-2) escaped further trouble from there, though, with a fly out from Dru Baker and a strikeout of Fulford to end the inning.

Loricco matched Hampton with six innings of work as he surrendered all six runs off eight hits and recorded six strikeouts. Joel Rubin and Teddy Lepcio combined to blank the Red Raiders in an inning of work each out of the bullpen.

Army will face the loser of the North Carolina and UCLA game at 2 p.m. Saturday afternoon. The Red Raiders will face the winner later that evening in an 8 p.m. first pitch with television designation still to be determined.