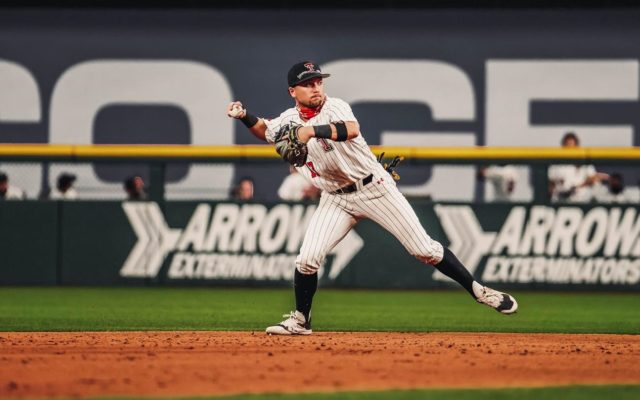 Conley is the first Red Raider to win the award, which was established in 2004 and honors the nation’s top shortstop. It is named for former Texas Tech shortstop Brooks Wallace, who played for the Red Raiders from 1977 to 1980. Wallace died of leukemia in 1985 at the age of 27.

“The nominating committee had such a phenomenal group of young men as finalists to choose from, and I feel like we made a great choice in Cal,” said Larry Wallace, co-chair of the Brooks Wallace Award selection committee. “The combination of leadership, hard work and perseverance that Cal exhibits are all qualities we look for in representing the award. Along with his defensive skills, hitting for average and the bonus of hitting with power made him a great choice.”

A redshirt freshman from Mount Carmel, Ohio, Conley showed all the tools at shortstop from his range, athleticism and strong arm, while also displaying the ability to hit for average and for power at the plate.

Conley helped lead the Red Raiders to their third straight Super Regional while hitting .329 with 15 home runs and 55 RBI. He finished with a .987 OPS with 21 walks and just 38 strikeouts in 225 at bats. He also led the Red Raiders with 23 multi-hit games and hit safely in 43-of-56 games this season.

The Brooks Wallace Award weighs defensive performance as heavily as offense, and Conley proved to be one of the top defensive shortstops in the nation as well. He fielded at a .960 clip in the regular season with 133 assists and 71 putouts. He was part of one of the top middle infield tandems in the country that helped turn 45 double plays, which ranked 28th nationally.

In addition to earning All-Big 12 First Team honors, Conley continues to be recognized on the national level. He has been named a Second Team All-American by Collegiate Baseball Newspaper, a Freshman All-American by the NCBWA, and a first team member of the NCBWA’s All-District team. Additionally, he received three weekly accolades this season, including Bobby Bragan Award Player of the Week (March 16), College Baseball Foundation National Shortstop of the Week (April 20) and Big 12 Newcomer of the Week (May 17).

The award will be presented by the College Baseball Foundation during the virtual Night of Champions event on June 26.