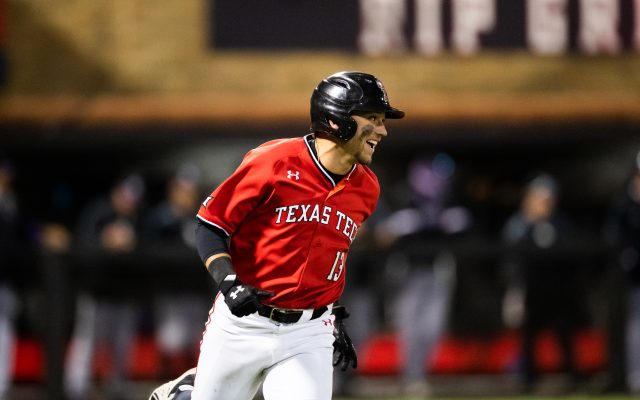 LUBBOCK, Texas – Cal Conley answered a three-run Lumberjack ninth with a walk-off single in the bottom of the inning to send No. 8 Texas Tech to a 4-3 midweek win over Stephen F. Austin on Tuesday night at Dan Law Field at Rip Griffin Park.

Conley’s only hit of the night came at a good time as the Red Raiders found themselves in a tie ballgame after carrying a 3-0 lead into the ninth. A one-out single from Braxton Fulford followed by a pair of walks loaded the bases and set the table for Conley as he lined a 2-2 pitch the opposite way into left field for the winning run.

It was the second walk-off in three games for Conley, who hit a walk-off home run in the 10th inning to even the series against TCU last Saturday. The Red Raiders (23-7; 5-4) are now 8-1 in one-run games this season behind three-walk off performances.

With the wind blowing in on Tuesday, both offenses were held in check throughout the course of the game as Tech received several strong performances on the mound in limiting the Lumberjacks (12-15; 9-7) to three hits. All six pitchers who took the mound for the Red Raiders were freshmen, headlined by Brendan Girton’s 4.0 shutout innings in his first career start.

Josh Sanders and Chase Hampton followed Girton’s effort, splitting 4.0 more scoreless frames. Tech then handed it over to Andrew Devine, who recorded the first two outs in the ninth before the Lumberjacks put together a late rally. With two outs and the bases loaded, SFA’s Kade Clemens hit a three-run double down the left field line off Derek Bridges to extend the game. Chase Webster (1-0) recorded the final out of the ninth to earn his first career win.

Seven different Red Raiders contributed to the team’s eight hits, with Braxton Fulford leading the way in going 2-for-3 with two runs. Fulford and leadoff hitter Easton Murrell scored all four runs for Tech from the top of the lineup. Cole Stilwell led Tech with two RBI, Jace Jung recorded his nation-leading 45th of the year while walking a career-high four times, and Conley tacked on the final run.

Tech recorded a first-inning run for the third consecutive game on a Stilwell sacrifice fly to take an early 1-0 lead. It stayed there until the bottom of the seventh when Jung notched an RBI single to center and Stilwell followed with a run-scoring double to left center that made it 3-0.

With the win, Tech improves to 5-0 in midweek games this season and extends its midweek home winning streak to 11 games. The win was also Tech’s 34th consecutive home win against teams outside the conference.