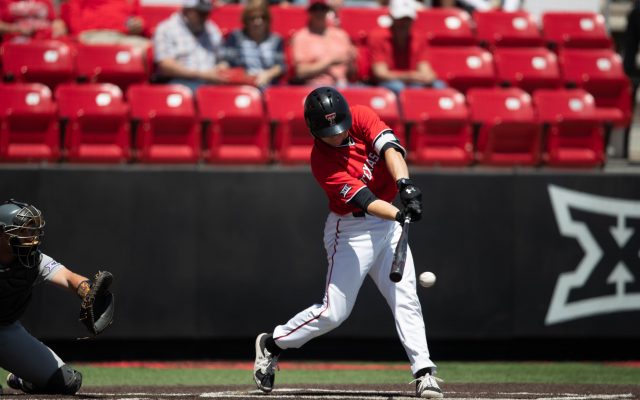 LUBBOCK, Texas – Cal Conley helped No. 8 Texas Tech even the series with No. 10 TCU with one swing of the bat Saturday as connected on a walk-off home run in the 10th inning, sending the Red Raiders to a 6-5 victory inside Dan Law Field at Rip Griffin Park.

The home run was Conley’s fifth of the season and couldn’t have come at a better time as he lifted a 1-1 pitch deep over the fence in left field to start the inning. It marked the second walk-off win for the Red Raiders (21-7; 4-4) so far this season after a similar Braxton Fulford 10th-inning home run against UConn on March 15.

Most importantly, the victory evens the series between Tech and TCU (22-8; 7-1) heading into Sunday’s rubber match. TCU entered the game having won 11-consecutive games and each of its seven contests in Big 12 play to that point.

Similar to Friday night’s series opener, the Horned Frogs scored the bulk of their runs in one inning as Hunter Wolfe drilled a grand slam over the left-field fence in the fourth to give TCU an early 4-1 lead. TCU added another run on a Tommy Sacco RBI single in the sixth.

The difference between Friday and Saturday, however, was the Red Raiders responded in the bottom half of the frame with four runs of their own, all with two outs in the inning. Fulford was plunked with the bases loaded to start the scoring, only to be followed by a two-run single from Jace Jung and a RBI single from Cole Stillwell.

For Jung, it was another solid day at the plate as he finished 2-for-5 overall with a pair of RBI. He is now 4-for-9 for the series with four RBI. Conley, meanwhile, joined Jung with a multi-hit game as he previously singled to start the second as part of a similar 2-for-5 day.

Tech chased TCU starter Austin Krob in the fourth after the left-hander surrendered four runs off four hits and five strikeouts. TCU reliever River Ridings (1-1) was charged with the loss after giving up the Conley home run in the 10th, marking the first earned run he had allowed over his now 11 appearances this season.

Ryan Sublette (4-0) picked up the win in one of the best performances of his career where he tossed four shutout innings with only two hits and a career-high matching five strikeouts. Both of TCU’s hits against the right-hander came on a pair of singles in the ninth, but he escaped the jam with a fly ball to left.

Derek Bridges bridged the gap between starter Patrick Monteverde and Sublette with the final two outs in the sixth. Monteverde left after 5.1 innings where he gave up five runs (four earned) off six hits and six strikeouts.