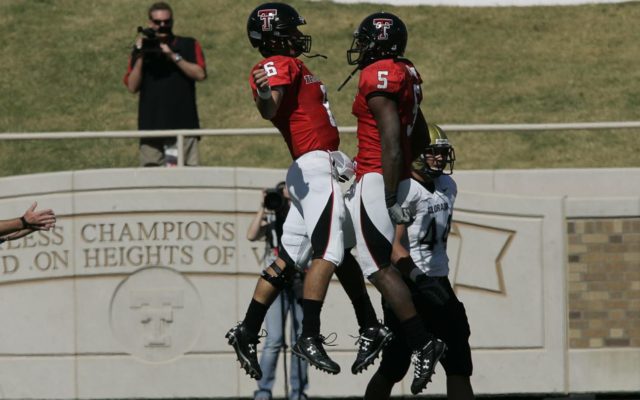 LUBBOCK, Texas – The National Football Foundation (NFF) tabbed Texas Tech greats Michael Crabtree and Graham Harrell to the ballot Wednesday for the 2022 class of the College Football Hall of Fame.

This is the first time on the national ballot for either Crabtree or Harrell, who combined to form one of the best passing-catching duos in school history during their Red Raider careers. They were two of 78 former players selected for possible induction Wednesday into the most prestigious society of former college football standouts.

Crabtree remains one of the top wide receivers all-time after becoming the first player in history to win the coveted Biletnikoff Award (nation’s top receiver, regardless of position) twice in a career. Crabtree was also a two-time All-Big 12 first team honoree and a two-time Unanimous All-American, making him the only Red Raider in school history to earn the distinction twice in a career.

Crabtree quickly found the national spotlight as a redshirt freshman in 2007 as he set the Texas Tech single-season marks as well as the NCAA freshman records for receptions (134), receiving yards (1,962) and receiving touchdowns (22). His impressive debut has not been matched since as he still ranks third all-time in NCAA history for single-season receiving yards and first among power-five receivers.

Crabtree followed with 1,165 yards and 19 touchdowns through the air as a sophomore en route to closing his Texas Tech tenure as the school’s all-time career leader in receiving yards (3,127) and touchdown catches (41). His mark for career receiving yards has since been snapped by Jakeem Grant, who totaled 3,289 yards over his four seasons (2011-15).

Almost every pass Crabtree caught over his two seasons came from the arm of Harrell, who torched opposing defenses to the tune of 15,793 passing yards over his Red Raider career. Harrell finished fourth in the 2008 Heisman Trophy voting, narrowly topping Crabtree, who was fifth overall after a memorable season that saw the Red Raiders finish 11-1 in the regular season and rise to No. 2 in the national polls.

Harrell was named the Sammy Baugh Trophy winner as a junior in 2007 before claiming the Johnny Unitas Award as well as AT&T All-America Player of the Year and Sporting News Co-Player of the Year honors in 2008. He was also tabbed a first team All-American by the AFCA following a 2008 season where he threw for 5,111 yards and 45 touchdowns.

Crabtree and Harrell were both named to the 2020 Texas Tech Hall of Fame Class last summer and will be formally inducted this fall. Crabtree will also be enshrined in the Texas Tech Ring of Honor this season as he will become the sixth member of the prestigious club on Sept. 17, the night prior to the Florida International game.

The duo was joined on the ballot by a pair of former Red Raider head coaches in Jim Carlen (1970-74) and Pete Cawthon (1930-40). Carlen compiled a 37-20-2 record in his five seasons leading the Red Raiders, which was highlighted by an 11-1 campaign in 1973 that earned him National Coach of the Year honors. He was a three-time Southwest Conference Coach of the Year after leading Texas Tech to a bowl appearance in four of his five seasons.

Cawthon, meanwhile, boasts the highest winning percentage (.693) all-time by a Texas Tech head coach after he led the Red Raiders to four Border Conference titles over his 11 seasons. Cawthon, only the third head coach in program history, was 76-32-6 while leading the Red Raiders, which included a perfect 10-0 regular season in 1938 that resulted in the school’s first-ever Cotton Bowl appearance.

To be eligible for the College Football Hall of Fame ballot, players must have been the following: named a first team All-American by a major/national selector as recognized by the NCAA for its consensus All-America teams; played their last year of intercollegiate football at least 10 full seasons prior; played within the last 50 years; and cannot be currently playing professional football.

Voting for the 2022 class will begin this week among more than 12,000 NFF members and current Hall of Famers. Votes will be tabulated and submitted to the NFF’s Honors Court, which will deliberate and select the class ahead of the official unveiling in early 2022.

Texas Tech currently has five former players enshrined in the College Football Hall of Fame in Atlanta as E.J. Holub was inducted in 1986 followed by Donny Anderson in 1989, Dave Parks in 2008 and Gabe Rivera in 2012. Zach Thomas became Texas Tech’s most recent inductee as part of the 2015 class.