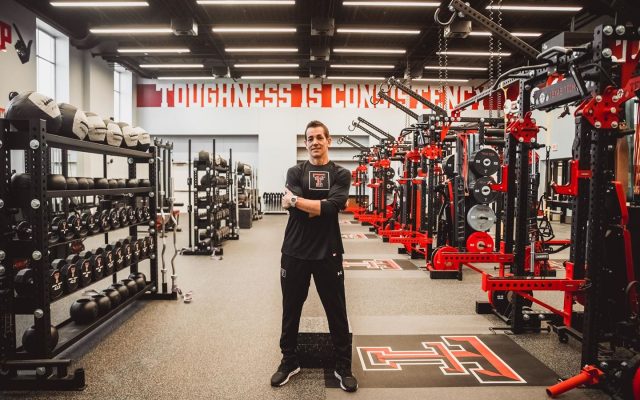 LUBBOCK, Texas – Texas Tech head coach Mark Adams has announced the hiring of Darby Rich as the men’s basketball strength and conditioning coach. Rich played college basketball at Alabama before beginning his coaching career where he has helped lead nine teams to the NCAA Tournament and 14 players to the NBA.

“I’m really excited about this opportunity at Texas Tech,” Rich said. “I’ve been following what this program has been able to accomplish and have been nothing but impressed by the success. It’s exciting for me to be able to be a part of continuing to build this program even more.”

Rich arrives in Lubbock after working the past two seasons at the University of Memphis with head coach Penny Hardaway following eight seasons at Texas A&M. Widely regarded to be at the top of his profession, Rich also worked at the University of Oklahoma (2004-09) and South Carolina (2002-04). He began his career in 1994 as an assistant basketball coach at Hutchinson Community College which won the 1994 NJCAA national title.

“My approach everyday is hard work, toughness, accountability and mental toughness,” Rich said. “At the same time, with my background as a player and basketball coach, I try to make the weight room an extension of the basketball floor. I don’t want them coming in here just to get bigger and stronger, I want them coming in here to become better basketball players because of the work we are doing in here. Every exercise that we do has a basketball purpose. The understanding and purpose creates extra motivation to put forth more effort into everything we are trying to accomplish.”

A Greer, South Carolina native, Rich played five seasons at Alabama where He was a member of the Crimson Tide’s 1989, 1990 and 1991 SEC championship teams. He served as a tri-captain his senior year (1992) and was teammates with future NBA stars Robert Horry and Latrell Sprewell. Rich was a three-time SEC academic honor roll selection for head coach Wimp Sanderson. He was an All-State basketball player at Riverside High School in South Carolina before joining the Crimson Tide.

“We think we have hired one of the best strength and condition coaches in the nation,” Adams said. “Coach Rich comes highly recommended from people at the professional and college level and brings in a lot of experience that will help our program reach the next level. With his background of being a college player, college coach and working as a strength coach at high-level programs throughout the country we are excited to see the impact he makes for our program.”

In two seasons in Memphis working with Hardaway and the Tigers, Rich helped develop NBA 1st Round Draft selections James Wiseman (2nd overall) and Precious Achiuwa (20th overall). Along with helping Achiuwa and Wiseman reach professional goals after one season, Achiuwa earned American Athletic Conference Player of the Year and Freshman of the Year honors in 2020. This past season, Moussa Cisse was named the AAC’s Freshman of the Year and the Tigers earned back-to-back 20-win seasons and the 2021 NIT championship.

During his time in College Station working on Billy Kennedy’s staff, Rich helped nine players earn all-conference accolades. He also worked with first round NBA Draft selection and two-time SEC Defensive Player of the Year Robert Williams, NBA All-Star Khris Middleton, Danuel House and NBA champion Alex Caruso. Along with individual success and development, the Aggies won the SEC championship in 2016 and advanced to the Sweet 16 of the NCAA Tournament in 2016 and 2018.

Rich also spent five seasons (2004-09) as the strength and conditioning coach for the University of Oklahoma men’s basketball team. During his tenure working with head coach Kelvin Sampson, the Sooners made the NCAA Tournament four times (2005, 2006, 2008, 2009) and claimed the 2005 Big 12 Championship. In his final season in Norman, OU went 30-6 and advanced to the NCAA Elite 8.

At Oklahoma, Rich worked with Blake Griffin, who was selected first overall by the Los Angeles Clippers in the 2009 NBA Draft. He left following the 2008-09 season to work as a personal strength coach for pro golfer Anthony Kim, who won the 2010 Shell Houston Open and was third at the 2010 Masters.

Rich joined the Oklahoma program after serving the previous two seasons as South Carolina’s men’s basketball strength coach, where he helped the Gamecocks to 35 wins and the program’s only NCAA Tournament berth in the previous 14 seasons. Rich also served as USC’s women’s basketball strength coach during that time, working with an NCAA Tournament team in 2003.

Before his stint with South Carolina, Rich spent a year and a half as a strength and conditioning intern with the NFL’s Dallas Cowboys. He began that position, working under legendary strength coach Joe Jurazsek, in May 2001.

Ahead of making the temporary move to football, Rich spent three seasons (1998-99 through 2000-01) as an assistant coach at Sam Houston State. Working for head coach Bob Marlin, he helped the Bearkats win the school’s first Southland Conference title (2000) and recorded the school’s highest Division I victory total for a season (22 in 2000). Rich rejoined Marlin at SHSU in December 2009 as a volunteer assistant coach, helping Marlin’s team win the 2010 Southland Conference regular season and tournament championships and to the program’s second NCAA Tournament appearance.

Rich began his college coaching career at Hutchinson (Kan.) Community College, serving from 1994 to 1998 as an assistant coach. Along with his assistant coaching responsibilities, Rich also served as HCC’s strength and conditioning coach. Hutchinson was 117-24 during his tenure and won the 1994 NJCAA national title.

A 1992 Alabama graduate with a degree in criminal justice, Rich and his wife, Jennifer, wed in September 2006. The couple welcomed their first child, Case, in August 2011, and a second son, Cannon, in February 2014.