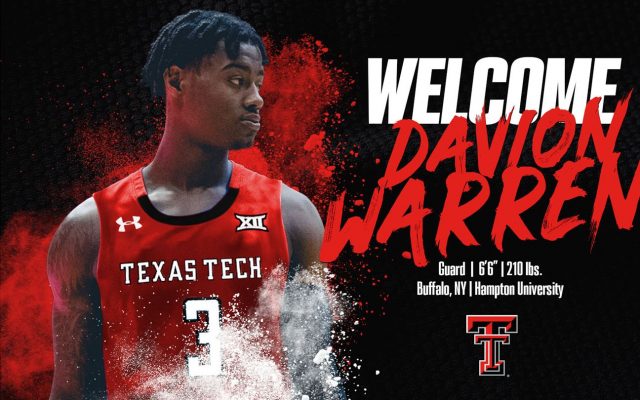 LUBBOCK, Texas – Texas Tech head coach Mark Adams has officially announced the signing of guard Davion Warren to a financial aid agreement. Warren averaged 21.2 points, 6.3 rebounds and 2.1 steals per game during his senior season at Hampton University before deciding to transfer where he will have one year of eligibility.

A Buffalo, New York native, Warren had an incredible senior season for the Pirates where he would earn NABC All-District First Team, Big South First Team All-Conference and Hoopshd.com Big South Player of the Year and First Team All-Conference. He also was tabbed as the BOXTOROW’s HBCU Division I Co-Player of the Year and All-American. His 21.2 ppg. was the 13th most in the nation and came with him shooting 45.5 percent (187-for-411) from the field, knocking down 48 3-pointers and making 108 free throws (75.5%).

“I’m excited to be able to compete for a conference championship and national championship,” said Warren who is graduating from Hampton with a liberal studies degree. “That’s the goal. I plan on bringing my effort and hard work every day. Everything else will fall into place.”

A 6-foot-6 guard, Warren scored a career-high 34 points against USC Upstate after going 13-for-20 (65 percent) from the field along with hitting three 3-pointers and making 5 of 5 free throws. A starter in all 25 games in his senior season with the Pirates, Warren was consistent throughout the year where he scored in double figures in 24 of 25 games and had 20 or more in 18 games. Along with his scoring, Warren finished the season with 75 assists and 52 steals in just 25 games.

The season started with him recording a double-double with 20 points and 10 rebounds at George Washington and concluded with a 22-point performance against Radford in the second round of the Big South Championship. His senior also included an impressive 32-point, 15-rebound game against UNC Asheville. In addition to his 22 points against Radford in the conference tournament, Warren would have five steals for the third time in his final season at Hampton.

Warren averaged 10.2 points and 6.2 rebounds per game as a junior in his first season at Hampton. He recorded five double-doubles and scored a season-high 20 points in a win over Charleston Southern and would also set a season-high with 15 rebounds against USC Upstate where he also had 12 points. Warren scored in double figures in 20 of 34 games played, including dropping 18 on Winthrop and Radford in Big South play.

Prior to playing at Hampton, Warren played at Olney Central College for two seasons. He would average 13.6 points, 6.2 rebounds and 1.2 steals per game as a sophomore, including going off for 20 points on 8-for-12 shooting in his final game. Warren played and graduated from Bishop Timon St. Jude High School in Buffalo, New York.

Warren had previously committed to transfer to play at Memphis before deciding to play his final season in Lubbock for Adams and the Red Raiders.

Warren joins the Texas Tech basketball program that has established a new program record by advancing to three straight NCAA Tournaments, including reaching the 2018 Elite 8 and 2019 NCAA National Championship Final.