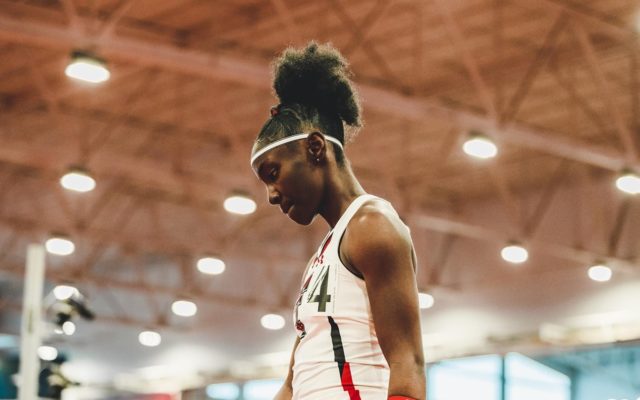 LUBBOCK, Texas – Texas Tech concluded its second day of the Texas Tech Invitational with encouraging performances across the board.

Personal bests came in handfuls on a day which also saw several facility records go down. The Tech effort was led on the track by D’Jenne Egharevba and Jacolby Shelton. Egharevba spent her Friday placing herself in the program record books twice more in the 60m. Her first came in the semi-finals when she ran a 7.38 to grab an at-large bid to the finals and tie her own mark from last season as the ninth-best in school history. Ninety minutes later, she ran a 7.35 – just three-hundredths from her personal record – to tie for fifth in the all-time top-10.

Shelton’s trip to the finals of the 60m came thanks to a 6.68 in the semis. There, the current conference leader turned in a strong 6.67 to place fourth in a stacked field.

In the earlier rounds of the 60m, Keion Sutton ran an encouraging personal best at 6.69. It was the first time the senior has gone sub-6.70 in his collegiate career. Sutton did so alongside fellow senior Derrius Rodgers, whose 6.70 in the semis would have earned him a lane in the final had it not been for Shelton grabbing the final at-large bid.

School record holder Gabrielle McDonald continued to impress in the 60m hurdles. The junior, who had previously not run sub-8.30, has now run sub-8.20 each of the five times she has competed this season. McDonald’s semi-final resulted in an at-large worthy 8.15, which she carried into the final and ran 8.18 to secure fourth in another stacked field.

The 400m group was strong as well as two Red Raiders hopped into the top-six in the conference rankings. Amanda Crawford led the way, running a 53.95 to take the spot of fifth in the Big 12. Jadsia Warden, who ran her first 400m of the year after competing in the 200m the first two meets, looked good at 54.41, which places her sixth in the conference.

Seasons Usual began her streak of PRs, doing so twice more Friday in the weight throw. The junior’s first personal best came on her second throw, where she went for 64’-8.5” (19.72m) to take the lead in the field. She followed it up with an exclamation point on her final throw, launching a 66’-2.5” (20.18m) to seal the win and slide into third in the Big 12.

Gabe Oladipo competed on the men’s side, finishing fifth in a stacked field of competition. He topped at 65’-2.75” (19.88m) in his second throw. It landed him his third top-10 program mark in three weeks.

Prior to the beginning of the meet, Kale Mauritsen completed the eighth-best heptathlon in school history in his collegiate multis debut. The freshman from Artesia, N.M., scored 5,209 points to break into the program top-10. The score came thanks to a tremendous second day of action, where he began with a 900-point 8.33 in the 60m hurdles, then scored 700+ in both the pole vault and 1000m to clinch the fourth-place finish.

The Texas Tech Invitational will conclude Saturday, with the third and final day of the meet set to begin at 11 a.m. The day’s events will be streamed on TexasTechTV.