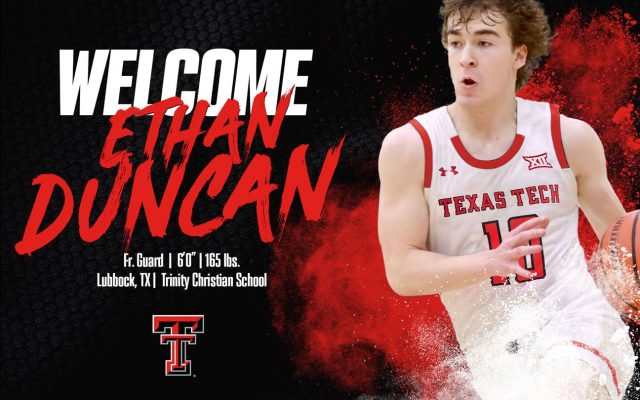 LUBBOCK, Texas – Texas Tech head coach Mark Adams has officially announced the addition of Ethan Duncan to the program. Duncan is a senior at Lubbock’s Trinity Christian School where he became the program’s all-time leader in scoring with 2,900 points and 600 assists.

“I’m blessed with the opportunity to play at Tech,” Duncan said. “I’m looking forward to developing as a player and a person and creating relationships with my teammates. I feel like I bring a high level of shooting, ball handling and decision-making. I’m a very hard worker and a gym rat.”

Duncan averaged 27 points, 7.0 assists and 2.5 steals per game in his senior season, solidifying himself as a four-time TAPPS All-State selection. He also earned TAPPS District 1-4A Most Valuable Player honors to cap his prep career where he led Trinity Christian to the state title game. Duncan was a three-time TAPPS District 1-4A MVP, earning the award as a sophomore, junior and senior after securing All-State and District Newcomer of the Year as a freshman.

“My strengths as a player are my speed and quickness,” Duncan added. “I can get to my spots on the court and find ways to set my teammates up for success. I play unselfishly and want what’s best for my guys.”

A 6-foot shooting guard, Duncan is the son of Todd Duncan who played for the Red Raiders from 1987-89. Todd Duncan has been the head coach at Lubbock Christian University for a decade and has been a staple of Lubbock basketball since starring at Lubbock Coronado High School as a player. He is the Texas Tech all-time leader in 3-point shooting percentage at 46.0 percent after going 132-for-287 in his two seasons.