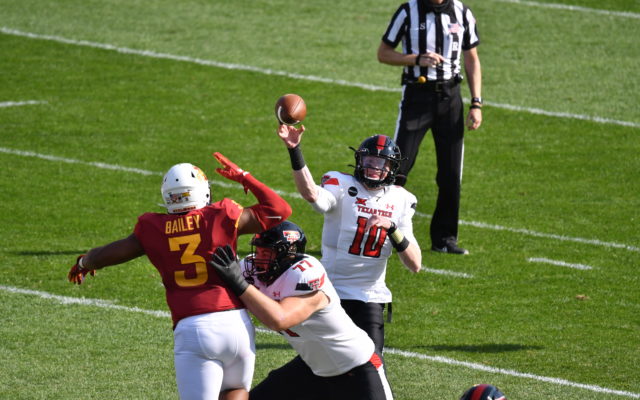 •  Today’s game marked the 19th all-time between Texas Tech and Iowa State and the ninth in Ames.

•  Iowa State won the toss and deferred to the second half. The Red Raiders had won the toss in all three games this year and have chosen to defer twice so far (Texas, Kansas State).

•  Texas Tech wore black helmets, white jerseys and black pants for the first time this season. Since 2009, the Red Raiders are 12-9 in the combination.

•  Today’s game captain was Jaylon Hutchings. As part of Texas Tech’s entrance pregame, Krishon Merriweather carried the U.S. flag, while DaMarcus Fields ran out with the state of Texas flag.

•  Gives Texas Tech an 11-8 record all-time versus Iowa State, including a 4-5 mark in games played in Ames.

•  The loss marked Texas Tech’s fifth straight at the hands of Iowa State, marking the Cyclones’ longest winning streak in the series.

•  Texas Tech has now scored in 286-straight games dating back to the 1997 season, a streak that now ranks seventh nationally and tied for second in the Big 12 Conference. The opening touchdown today pushed the Red Raiders and Oklahoma in a tie for the 11th-longest consecutive scoring streak in FBS history, matching Ohio State which scored in 286-straight games from 1993-2016.

•  With Eli Howard’s blocked field goal attempt on Iowa State’s opening drive, the Red Raiders have now blocked five punts or kicks in their 16 games now under Matt Wells. The Red Raiders blocked three field goals/extra points a year ago and then had a blocked punt a few weeks ago against Texas.

•  This is the second-consecutive trip to Ames where the Red Raiders have scored on a blocked kick. In the 2018 meeting between the two schools, Thomas Leggett blocked a punt and then recovered the loose ball in the end zone for the touchdown.

•  Texas Tech was limited to only 69 yards in the opening half, marking its fewest over the first 30 minutes since TCU held the Red Raiders to just 54 yards in 2018.

•  Texas Tech finished with 212 passing yards, marking its fewest in a game since Oklahoma held the Red Raiders to only 122 yards a year ago in Norman.

•  Matt Wells came into today’s game with a 28-9 career record when winning the turnover battle. The Red Raiders failed to surrender a turnover this afternoon, while forcing Iowa State into a lost fumble and also blocking a field goal that went all the way back for a touchdown.

•  Myles Price made his first career start at Texas Tech’s ‘H’ inside receiver position, making him the second true freshman to start at wide receiver this season. Price, who had two catches for 16 yards, joins Ja’Lynn Polk, who earned the starting nod a week ago at Kansas State.

•  Zech McPhearson scored Texas Tech’s first touchdown of the afternoon as he returned a blocked Iowa State field goal attempt 90 yards to the end zone. It marked the first time a Red Raider had returned a blocked field since Lawrence Flugence went 79 yards to the end zone following an Aaron Hunt block in 2000 versus Oklahoma State. McPhearson has been involved in three of the five blocked kicks in the Matt Wells era as he previously blocked a pair of field goal/extra point attempts as a junior in 2019.

•  In addition to his touchdown, McPhearson also notched a career high with 10 tackles. His previous mark for tackles was six, which he accomplished in six different games a year ago. McPhearson picked up an Eric Monroe forced fumble midway through the third quarter to give Texas Tech its best field possession at that point in the game.

•  Eric Monroe recorded a career high with 12 tackles, snapping his previous mark of five that was set while at LSU in a 2017 game against Auburn. He had previously matched that total a few weeks ago versus Texas. Monroe also knocked loose an Iowa State fumble in the third quarter, marking the first forced fumble in his career.

•  Alan Bowman finished 13-of-22 overall for 97 passing yards in his 14th career start at quarterback for the Red Raiders. It marked the fewest passing yards in a game where he has played into the second half in his two-plus seasons at Texas Tech.

•  Henry Colombi came off the bench for his second career appearance as a Red Raider, completing 10-of-12 passes for 115 yards and a touchdown, which came on an 18-yard strike to Erik Ezukanma.

•  Erik Ezukanma’a 18-yard touchdown catch in the fourth quarter marked his third of the season as he finished with five catches for a team-high 61 yards. He has now been on the receiving end of a touchdown catch in six of the past seven games dating back to the end of the 2019 season.

•  DaMarcus Fields broke up two passes in the loss, matching his career high that had been set four times previously in his career. He added seven tackles from his spot in the secondary.

•  Tony Bradford Jr. made a career-high eight tackles in the trenches, breaking his previous mark of four from Texas Tech’s 2019 win against Oklahoma State.