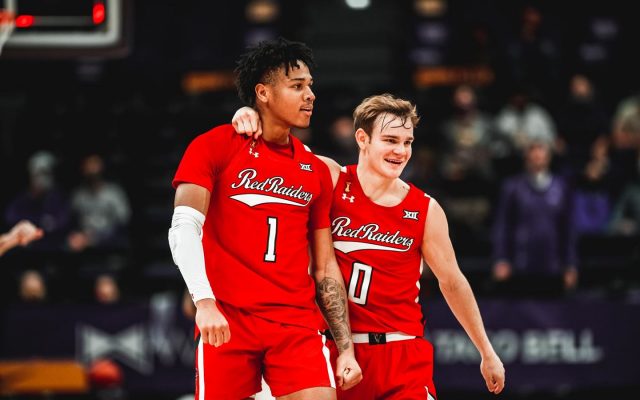 McClung, who is the first Red Raider to be named Big 12 Newcomer of the Year in program history, averaged 16.1 points and 2.3 assists per game this season to earn the trio of conference honors. A junior who transferred to Tech after two seasons at Georgetown, McClung averaged 17.0 points per game in Big 12 games which ranked fourth this year. He had 10 games throughout the season with 20 or more points, including a season-high 30 points at West Virginia where he hit four 3-pointers and 11 shots. He is 101 of 124 (81.5 percent) from the free-throw line and has 60 assists (2.3 per) with a season-high six assists against TCU and A&M-Corpus Christi. McClung earned Big 12 Player of the Week honors on Jan. 18 following scoring 22 points at Texas with the game-winner and then scoring 24 at home against Baylor before being named the Big 12 Newcomer of the Week on Feb. 1 for his 30-point performance against the Mountaineers and going off for 22 points in the Big 12/SEC Challenge win at LSU. A Gate City, Virginia native, McClung scored in double digits in 20 of 26 games this season and comes into the postseason having scored 1,128 points through 76 collegiate games.

Shannon earned All-Big 12 Third Team honors after a sophomore season where he averaged 12.5 points, 4.1 rebounds and 1.1 steals per game. He scored a season-high 23 points at LSU where he recorded his first career double-double by adding 10 rebounds and finished the regular season with four 20-plus scoring performance. He had a conference-high of 22 points in the home win over Kansas State and also dropped 21 points in the road win at Oklahoma after scoring 20 at home against Kansas. Shannon went 3-for-3 on 3-pointers at Baylor on Sunday and has now made 23 3-pointers for the season through 25 games played.

McCullar and Edwards were Big 12 Honorable Mention selections for the Red Raiders in their third season in the program. Edwards finished the regular season averaging 10.2 points per game after leading the team with 18 points with four 3-pointers in the loss at Baylor and led the team throughout the season in assists. He finished the regular season with 71 assists (2.7 per) after having four against the Bears which was the 15th time this season where he had three or more assists. He’s had four assists in three of the final four games of the regular season. A junior from Arlington, Edwards scored a season-high 20 points last Tuesday in the win over TCU and also had a pair of 19-point performances against Abilene Christian and Iowa State. He had a season-best seven assists in the opener against Northwestern State and also had a six-assist performance against West Virginia. McCullar is a redshirt sophomore from San Antonio who averaged 10.1 points and 6.2 rebounds per game for the Red Raiders. He missed the first nine games of the season due to an injury he suffered in the preseason but emerged as one of the top players in the Big 12 where he would finish third with 1.9 steals per game and eighth with 6.5 rebounds per game in conference play. McCullar scored a career-high 16 points and also had eight rebounds in the road win at Texas. He had two double-doubles this season, first with 15 points and 11 rebounds at Iowa State in his fourth game back and then going for 10 points and 10 rebounds at home against Baylor. McCullar goes into the postseason averaging 2.1 assists and 1.6 steals per game.

Cunningham became just the fourth freshman in Conference history to earn Player of the Year while Baylor’s Scott Drew picked up Coach of the Year for the second consecutive season in the 2020-21 Phillips 66 All-Big 12 men’s basketball awards chosen by the head coaches. Cunningham was also the unanimous Freshman of the Year while McClung was the unanimous Newcomer of the Year. Baylor’s Davion Mitchell was voted Defensive Player of the Year, Kansas’ David McCormack received the award for Most Improved Player and Texas’ Kai Jones was chosen for the Sixth Man Award. The All-Big 12 First Team consisted of Cunningham, Baylor’s Jared Butler and Davion Mitchell, Oklahoma’s Austin Reaves and West Virginia’s Derek Culver. Cunningham and Butler were unanimous selections. In addition to Cunningham, the other Big 12 rookies who swept both Player and Freshman of the Year were OSU’s Marcus Smart (2012- 13), K-State’s Michael Beasley (2007-08) and Texas’ Kevin Durant (2006-07). Cunningham finished the regular season as the league’s top scorer in both overall (19.7) and conference (20.1) games and is on the national ballot for the John R. Wooden Award. He is also a finalist for the Bob Cousy Point Guard Award and was the Oscar Robertson National Player of the Week after his 40-point, 11-rebound performance in an overtime win at then-No. 7 Oklahoma. According to Stats Perform, only four other power conference players over the last 20 seasons can match Cunningham’s all-around stat line of 19.7 points, 6.3 rebounds, 3.5 assists, 1.4 steals and 1.0 blocks per game. Mitchell has been recognized for his defensive play in both of his seasons at Baylor. In addition to the Defensive Player of the Year honor, he has been named to the Big 12 All-Defensive Team for the second time and repeats as a finalist for Naismith Defensive Player of the Year. He is second in the Big 12 in steals (1.9) behind teammate Butler and second in turnover/assists ratio (2.3). He averages 13.8 points and leads the team with 125 assists, including two performances of double-digit assists.

Texas Tech is set to open the Big 12 Championship against Texas at 8:30 p.m. on Thursday in a quarterfinal matchup at the T-Mobile Center in Kansas City. The Red Raiders went 2-0 against the Longhorns this season with a 79-77 win in Austin before securing a 68-59 win at home on Feb. 27 in the last matchup. The programs have met six times in the Big 12 Championship with UT leading with a 4-2 advantage after Tech earned a 73-69 in the 2018 tournament the last time the two teams meet up in the postseason. Tech and Texas were set for a quarterfinal matchup last season also before the tournament was canceled due to Covid.