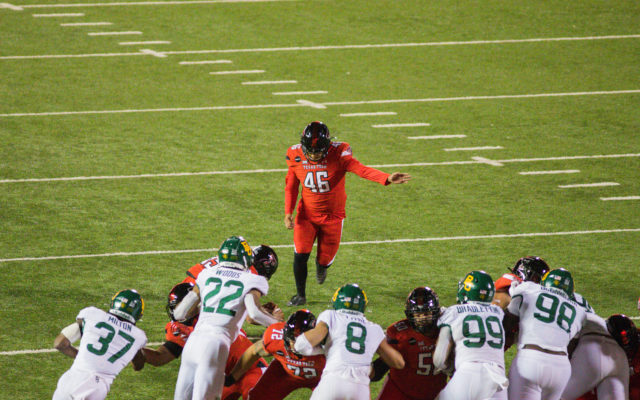 IRVING, Texas – Texas Tech senior place kicker Jonathan Garibay was named a first team All-Big 12 selection while five others were picked for the second team and 11 held nods for honorable mention, the league announced on Thursday. Selections are made by the league’s 10 head coaches, who are not permitted to vote for their own players.

Individuals earn honorable mention recognition by receiving at least one vote on their respective ballots they were picked for from the panel of conference coaches.

First-Team All-Big 12: Jonathan Garibay — Place Kicker — Senior
Earns first team honors in first full season serving as Tech’s primary place kicker.
Named one of 20 Lou Groza Award semifinalists.
Becomes third Texas Tech place kicker to earn first team honors since 2000, joining Alex Trlica (2007) and Clayton Hatfield (2018).
Tied a program record for consecutive made field goals with 13 during the 2021 season.
Finished regular season 13-of-14 with a long of 62 yards. Converted all 12 attempts 50 yards or shorter.
Set the FBS record for longest game-winning field goal, netting a 62-yard kick as time expired against Iowa State on Nov. 13.
Named Big 12 Player of the Week, Oct. 4, after completing a 3-for-3 performance with a 32-yard game-winner in the closing minute for a 23-20 victory at West Virginia.
Named Big 12 Player of the Week, Nov. 15, after connecting on a pair of field goals against the Iowa State, none more important impressive than his 62-yarder as time expired, that sent the Red Raiders to their sixth win of the season to reach bowl eligibility.
Second-Team All-Big 12: Erik Ezukanma — Wide Receiver — Junior
Picks up All-Big 12 honors for the second year in a row following being tabbed to the first team in 2020.
Ranks sixth in the Big 12 in receiving yards, totaling 705 yards.
Tied for the second-most 100-yard receiving games among his Big 12 peers with three.
Ranks fourth among all Big 12 receivers for single game receiving yard performances, totaling 179 in the season opener versus Houston.
Tied for the second-longest reception in the Big 12 with his 75-yard touchdown reception on Sept. 11.
Second-Team All-Big 12: Dawson Deaton — Offensive Line — Senior
Earns second-team honors for the second-straight season.
Started at center in 10 of 12 games.
Helped lead Tech to its third-most rushing yards in a season through 12 games since 2000, producing 1,808 yards on the ground.
Production on the ground also led to pay dirt 27 times, tied for the 26th most rushing touchdowns in the FBS.
Second-Team All-Big 12: Colin Schooler — Linebacker — Senior
Led Texas Tech in tackles (97), quarterback hurries (10) and forced fumbles (3).
Ranks fourth in the Big 12, and 48th in the FBS, in tackles per game (8.1).
Ranks fourth in the Big 12, and 19th in the FBS, in solo tackles per game (5.2).
One of four Big 12 players to set the league’s 2021 single-game high in tackles with 15.
Named Big 12 Player of the Week, Oct. 4, following season-high 15 tackles, and a strip-sack (one sack, one forced fumble) in a 23-20 win at West Virginia.
Second-Team All-Big 12: DaMarcus Fields — Defensive Back — Senior
Led Texas Tech with 10 pass breakups. and tied for the Big 12 lead in that category.
During the eighth game of the season, his pass breakup pushed him past Jamar Wall (2006-09) for the most pass defended by a Red Raider in a career since 2000.
For his career, Fields ranks second among active FBS players with 48 passes defended.
Ranks seventh on the team with 47 tackles, and recorded a season-high nine tackles in Sept. 11 game against SFA.
Second-Team All-Big 12: Austin McNamara — Punter — Junior
Earns All-Big 12 honors for the third consecutive season; was named to the 2019 and 2020 first teams.
Named Big 12 Player of the Week, Nov. 22, after recording an FBS single game record eight punts that sailed 50 yards or greater against Oklahoma State on Nov. 20.
Averaged 56.4 yards per punt using a season-high nine attempts against Oklahoma State; the average was short of the program record 57.0 albeit being on three attempts.
The 56.4 average marked the third-highest for any punter with at least nine attempts in a game dating back to 2000.
Ranks second in the Big 12 for average yards per punt (48.4).
Ranks second in the Big 12 for number of punts of 50 yards or greater (17).

Defensive Newcomer of the Year
Siaki Ika, Baylor, DL, So.