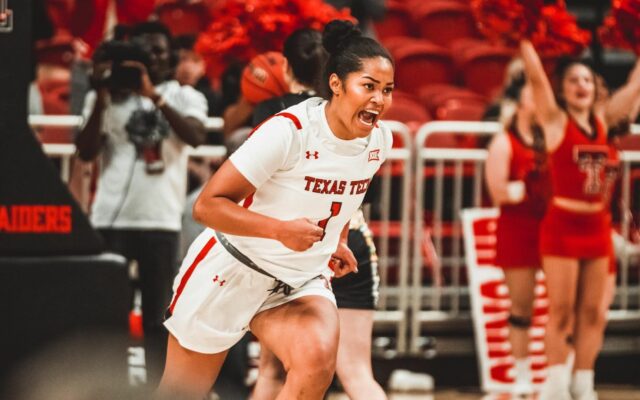 LUBBOCK, Texas – Ella Tofaeono scored a career-high 18 points and Taylah Thomas recorded a double-double with 15 points and 10 rebounds to lead Texas Tech to a 67-45 season-opening win over Southeastern Louisiana on Thursday at the United Supermarkets Arena. The win secured the 300th career victory for head coach Krista Gerlich and came with four Lady Raiders scoring in double figures.

Tech improved to 3-1 in the series history over SLU. Taylor Bell led SLU with nine points, while Alexius Horne and Morgan Carrier added seven each.

Texas Tech jumped out to a 26-8 lead after the first quarter with Tofaeono dominating with eight points and Thomas adding four. Seven players had scored for the Lady Raiders after 10 minutes, while SLU had only scored eight points. Along with the 9-0 run to start the game, Tech went on a 10-0 streak with Tofaeono making the final three baskets to push the lead to 19-3. The Lady Raiders were 11-for-14 from the field in the first quarter, while the Lady Lions were only 1-for-11.

The Lady Raiders went into halftime with the 18-point lead with Tofaeono at 12 points on 4-for-4 shooting and Thomas at seven points. Tofaeono also had six rebounds and a blocked shot in a dominate opening 20 minutes of play. Tech was 14-for-29 shooting in the first half with Hightower and McKinney hitting 3-pointers. SLU finished the half shooting 7-for-27 from the field and were outrebounded by a 24-13 margin. Tech led by as many as 20 with its 28-8 lead early in the second quarter on a Tofaeono second-chance layup.

Texas Tech returns to action Weber State at 7 p.m. on Tuesday, Nov. 16 at the United Supermarkets Arena in the first meeting between the two programs. The Wildcats opened their season with a 72-57 win over North Dakota and will host Portland on Saturday before making the trip to Lubbock. TTU is beginning its season with a four-game home stand which also includes hosting Lamar on Friday, Nov. 19 and Texas State on Nov. 22 at the USA before traveling to Katy, Texas for the Van Chancellor Classic from Nov. 26-28 at the Merrell Center.