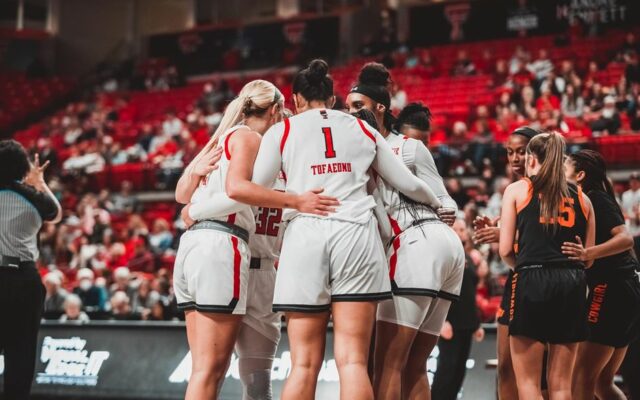 NORMAN, Okla. – Behind another 35-point effort from senior Vivian Gray, and 77 from its seniors, the Texas Tech Lady Raiders dropped No. 15 Oklahoma, 97-87 Wednesday night at the Lloyd Noble Center.

Gray, who hit 2,000 points for her Division One career on a one-legged triple the just beat the shot-clock 57 seconds into the fourth, scored 10 points in both the first and fourth quarters. The All-American became the fourth player in Lady Raider (10-14, 3-10 Big 12) history to reach 2,000 points.

Gray recorded her third 30-point performance of the season, and now has scored at least 20 points in four straight contests.

The combo-guard was joined in double-figures by Taylah Thomas who scored 22 points and had 13 rebounds and Lexy Hightower who scored 20 points. Thomas and Hightower were both a perfect 6-for-6 from the line.

HOW IT HAPPENED:
Behind a strong start from Gray, Hightower and Thomas, the Lady Raiders raced out to an 8-0 start Wednesday night.

After Oklahoma cracked the ice on a jumper, Tech used back-to-back jumpers from Gray to take a 12-2 lead with 6:22 to play.

The two teams traded baskets on the next two possessions, giving Tech a 14-4 lead at the under-five media timeout of the first.

OU scored eight of the next 10 points to cut the double-digit Lady Raider lead to just 16-12 with 2:35 to play in the period.

Behind a jumper from Norman native Chantae Embry and a second-chance layup from Thomas, the Lady Raiders enjoyed a 20-14 lead after one. Tech held OU to just 6-of-21 shooting and outrebounded the Sooners 15-10 in the opening period.

Over the next three minutes and change of gametime, OU and Tech continued to trade punches, as Tech led 29-28 with 4:22 left.

Over the final four minutes of the second, the Lady Raiders took a three-point lead three times, but Nevaeh Tot hit a 3-pointer that tied the score at 37-all.

Powered by Gray, Texas Tech scored the first five points of the third. The run gave the Lady Raiders a 42-37 with 8:28 to play.

It was then Oklahoma’s turn to make a run, as the Sooners scored seven of the next eight to tie the game at 49 with 4:27 left in the third.

The Sooners score the final three to cut the Tech lead to 63-60 after three quarters.

Just 55 seconds into the fourth, the one-legged Gray triple brought the combo-guard to 2,000 points on her D-I career. The shot also gave the Lady Raiders a 66-60 advantage with 9:05 left in the contest.

Over the final 90 seconds of play, Oklahoma twice cut the Tech lead to five, but clutch free throws from the senior trio (Gray, Hightower, Thomas) sealed the victory that snapped a seven-game losing streak for Texas Tech.

INSIDE THE BOXSCORE:
• Gray is the first Lady Raider player since Alicia Thompson in 1998 to reach 2,000 points.
• Gray also eclipsed 800 points in her Tech career.
• The Texan has now scored at least 30 points three of the last seven games.
• She has scored 181 points over those seven games (25.9) and 281 points in 13 Big 12 games (21.6).
• Gray is averaging 20.8 points this season overall and is just 94 points shy of 2,500 for her entire five-year career.
• Against top-25 teams Gray has now scored 525 points in 26 games against ranked opponents (20.2/game).
• Hightower’s 20 points are the most she has scored in a Texas Tech uniform.
• The senior shot 6-of-8 from the floor, 2-of-3 from three and 6-of-6 from the line.
• Hightower was a team-best +25 in her nearly 29 minutes of action and added five rebounds.
• Tech held OU to just 8-of-27 (29.6 percent) shooting from behind the arc.
• Thomas has now scored 47 points in two matchups vs. OU this season.
• The Arkansas transfer has now recorded a double-double in consecutive games and has seven for the season.
• Thomas is averaging 10.4 points and 9.0 rebounds this season.
• Tech won for the first time under Gerlich when allowing 80 points. Tech was 0-9 in those instances.

COACH SPEAK (HC KRISTA GERLICH):
“From the tip, I thought we were locked in. Everyone knew their roll and assignment. They really just executed fantastically well. Both Taylah and Vivian played great and put us on their back like seniors should. They played with a lot of poise which was fantastic. And then Lexy was great as well. All three of them set the tone for us tonight. I was very happy with the way we started the game, but also how we never got never let up or got rattled. We continued to battle and stayed true to the gameplan. Oklahoma is an exceptional team that is having a fantastic season. They have so many weapons but I thought we gave a great defensive effort despite the fact that they scored 87 points. The fact that we were able to limit them a bit offensively was the key for us tonight.”

VIVIAN GRAY:
“I was very happy to score my 2,000 point, but it makes it even sweeter that it came during a great team win. So many people stepped up tonight. I had no idea until after the game that I reached 2,000, but I’m very proud of accomplishing that. And I’m very proud of the win tonight.”

UP NEXT:
The Lady Raiders return to action on Saturday when Kansas visits United Supermarkets Arena for a 2 p.m. contest. The game will be the Lady Raiders annual pink game.