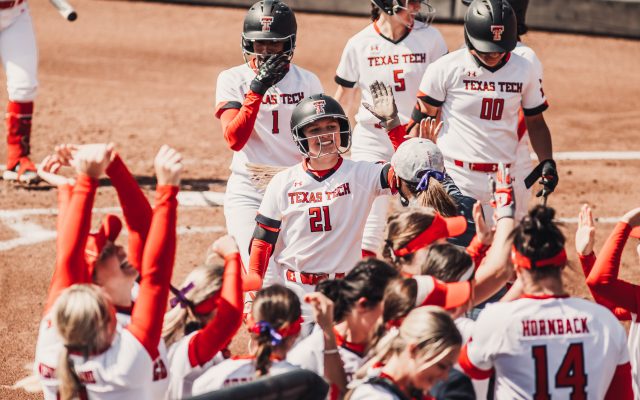 This marks the first time in program history Texas Tech has swept the weekly softball awards.

LUBBOCK, Texas – After a historic weekend at Rocky Johnson Field, Karli Hamilton and Missy Zoch have been named Big 12 Player and Big 12 Pitcher of the Week, the conference announced Tuesday.

Hamilton earns her the fifth conference player of the week award of her career, and the first since 2019. Zoch earns the first Big 12 honor of her career.

Hamilton started off the weekend with a career milestone, tallying her 200th career hit in her first at-bat of the weekend against UTEP. A few innings later her 201st career hit went over the wall in left center for a two-run home run.

The highlight of the weekend, and of Hamilton’s career, came on Sunday when the senior tallied a program record nine RBI and two grand slams in a 23-0 win over Tarleton State. The super senior recorded grand slams in back-to-back innings and later added an RBI single to break the RBI record. Her two grand slams tied the NCAA single-game record and only 13 players in NCAA history have recorded more RBI in a game. Hamilton finished the weekend with six hits, three home runs, two grand slams, four walks, 13 RBI, and an .833 slugging percentage.

Zoch held her own in the circle, coming away with two shutout wins on the weekend while tallying 17 strikeouts. The Winchester, Texas native pitched a complete-game one hit shutout against UTEP with six strikeouts, allowing just four Miners to reach base. She capped off the weekend with her second career no-hitter, the eighth in Texas Tech history, in a 23-0 win over Tarleton State. Zoch tied her season high with eight strikeouts against the Texans.

Hamilton and Zoch both opted to use their extra year of eligibility to return to Texas Tech for one final season in 2021. Hamilton leads the team in home runs, triples, RBI, on base percentage and total bases. Zoch leads the pitching staff in ERA and opponent batting average and is tied for the lead in wins and shutouts.