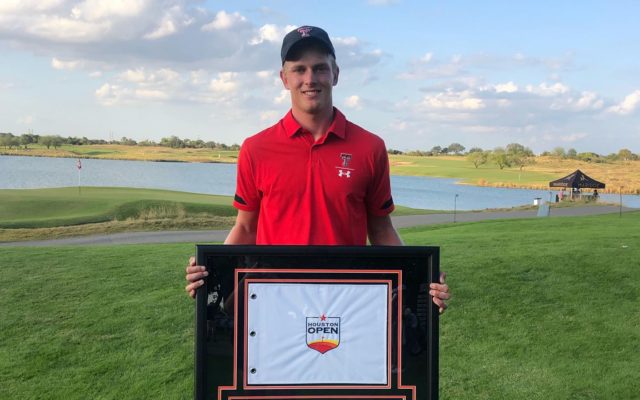 CARROLLTON, Texas – Texas Tech senior Kyle Hogan not only won his first collegiate tournament with a one stroke Maridoe Collegiate victory on Tuesday, but also secured an exemption to play in the PGA Tour’s Vivint Houston Open.

Hogan, a senior from Cypress, won the Maridoe as the only player under-par after carding a 74-68-73 – 215 at the three-day event. His final score of 1-under had him in the clubhouse with the lead and with some tense moments before Oklahoma State’s Austin Eckroat made a bogey on his final hole to finish one back. Tech sophomore Garrett Martin earned seventh place at 3-over for the week for his top collegiate performance.

The Houston Open is scheduled for Nov. 2-8 at the Memorial Park Golf Course.

Hogan was playing the tournament as an individual and did not count in the team count along with Markus Braadlie (T21, 8-over) and Carl Didrik Meen Fosaas (36, 11-over). The Red Raiders finished the third of four fall tournaments in eighth place, while Oklahoma State took the team championship. OSU finished at 16-over for first, followed by Pepperdine at 19-over and Oklahoma which took third at 24-over. Tech shot 310-297-296 – 903 to finish at 39-over.

Texas Tech senior Sandy Scott was unable to play for the second straight day with a wrist injury following shooting a 76 on Sunday.

Hogan finished the tournament with 10 birdies and 36 pars to secure the championship. His top finish last season was a third-place showing at the Iverness Intercollegiate.
Texas Tech will conclude its fall schedule at the prestigious East Lake Cup on Oct. 26-28 in Atlanta, Georgia.