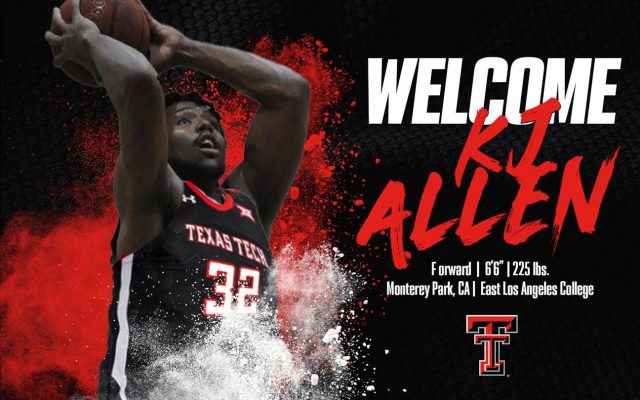 A Los Angeles, California native, Allen played at East Los Angeles College for one season where he averaged 18.5 points, 9.3 rebounds, 1.8 assists and 1.8 steals per game as a freshman during the 2019-20 season. A dynamic 6-foot-6 forward, Allen was a starter in all 30 games where the Huskies went 29-1 before the coronavirus cut the season short. He earned South Coast Conference North Player of the Year after helping the team win 25 straight games and go 8-0 in conference play.

“KJ is an explosive and physical player,” Adams said. “He’s a great competitor who was his team’s leading scorer. We’re excited about what he can bring to our team.”
Allen has been in the national spotlight with his team being featured on the inaugural season of Last Chance U: Basketball on Netflix. In recruiting, 247Sports ranks Allen as the 10th-best junior college prospect in the class of 2021.

Allen shot 67.4 percent from the field as a freshman and averaged 20.4 points per game in conference play. He scored a career-high 33 points by going 11-for-13 from the field against Mt. San Antonio and also had 31 against Copper Mountain where he was 12-for-14. His third game of 30 came against Long Beach in a season where he would score in double digits in 26 games with 13 games of 20 or more. In what turned out to be the season-finale, Allen scored 20 points on 7-for-10 shooting in a 68-58 win over Allan Hancock.
Allen is a Westchester High School graduate in Los Angeles where he helped lead his team to a 24-5 overall record.

He is the first signee for Adams who took over the Texas Tech head coaching position last week. The Red Raiders have advanced to three straight NCAA Tournaments and are 9-3 during that span. The program advanced to the 2018 Elite 8 and the 2019 NCAA National Championship final and is coming off a season where it reached the NCAA Tournament second round.