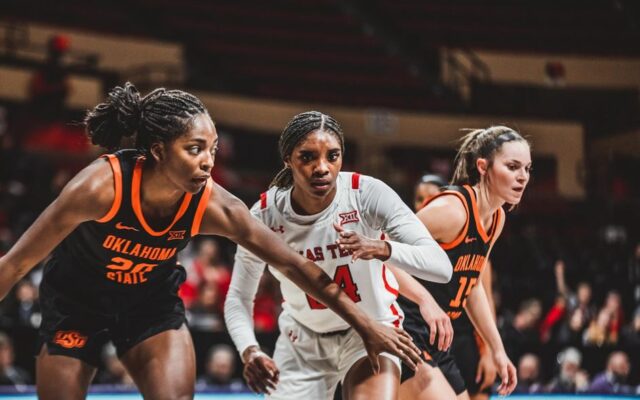 KANSAS CITY – The Texas Tech Lady Raiders fell to the Oklahoma State Cowgirls 73-58 in the First Round of the Phillips 66 Big 12 Championship Thursday night at Municipal Auditorium.

Guard Bryn Gerlich was the other Lady Raider to reach double-figures, as Gerlich scored 11 points on the night.

For the victorious Cowgirls (9-19), Lauren Fields scored a game-high 22 points while Lexy Keys poured in 19 points. OSU shot a blistering 7-of-8 from three in the second half including a perfect 4-of-4 in the fourth and final period.

After OSU raced out to the first 10 points of the contest, Tech scored its first points of the night with 5:44 to play in the opening period on an Ella Tofaeono layup.

After another triple from Fields gave OSU a 13-2 lead on the ensuing possession, Texas Tech made its run.

Sparked by a jumper from Gray, the Lady Raiders scored the next 12 points of the period to draw to within 13-12 at the 1:27 mark.

OSU used one last layup to extend its lead to 15-12 after 10 minutes of action.

After OSU scored five of the first nine points in the second period, Tech made another run.

A Taylah Thomas layup 31 seconds into the third period gave the Lady Raiders a game-high 36-28 lead, but OSU scored the next 11 points to take a 39-36 lead.

The 11-0 run prompted a timeout from Tech.

Following the timeout, Tech used a Gray jumper to draw to within 39-38, but a pair of free throws by Fields gave her side a 41-38 advantage with 4:43 to play in the third.

A Gerlich jumper and a triple from Rhyle McKinney gave Tech its final lead at 43-41, but OSU scored nine of the final 11 points to take a 50-45 lead into the fourth.

Tech battled and scored 10 of the final 13 and the final five points, to close to within 15 points.

INSIDE THE BOXSCORE:
• After shooting 52.9 percent from the floor in the second period, Tech shot 5-of-15 in both the third and fourth period.
• Tech turned the ball over 19 times Thursday and managed just four successful triples on 15 attempts.
• Both teams finished with 36 rebounds and 10 total offensive rebounds.
• McKinney finished with six points in 20 minutes.
• Gerlich also added five rebounds and three assists.

COACH SPEAK (HC KRISTA GERLICH):
“Tonight was a tale of two different halves. It’s difficult to understand what happened tonight. Our kids fought hard in the first half to get themselves back into the game. We even had a little bit of a lead at halftime. In the second half we didn’t defend the way we needed to. And then we turned the basketball over. Some panic set in and we started to take some bad shots. But, I couldn’t be prouder of our three seniors for the contributions they have made on our program this season. How hard they’ve played and how much effort they gave every time they stepped out on the floor. I’m disappointed it ended this way and I hate that for them. I wish I could have done more for them, and I should have done more for them, but they all have etched their names in the Lady Raider record books. That speaks volumes about their work ethic and character. I’m really proud of them.”