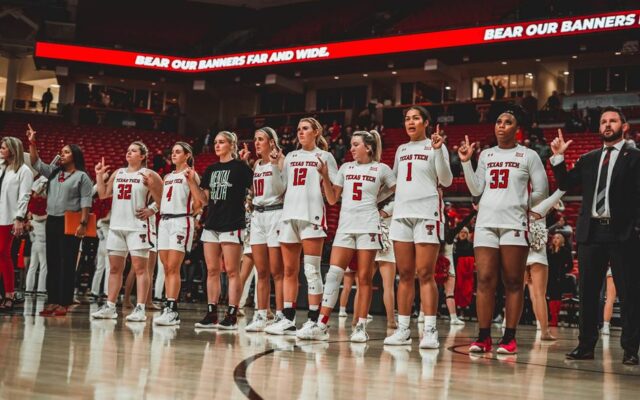 AMES, Iowa – Despite leading in the third quarter, the Texas Tech Lady Raiders fell to No. 9 Iowa State 71-55 Saturday afternoon at Hilton Coliseum.

The Lady Raiders scored the first four points of the fourth to draw to within 55-45, but the Cyclones used a 11-2 run to go up by a game-high 19.

Taylah Thomas scored a team-best 16 points, while Bryn Gerlich added 14 points, 10 of which came in the opening quarter.

After Iowa State used a Joens triple to spark a 7-2 run, a Thomas jumper brought the Lady Raiders to within 7-4.

Another 9-4 span gave the Cyclones a 16-8 lead, but a Gerlich and-one right before the opening media timeout of the contest, sparked a 10-4 run that brought Tech to within 20-18 after one quarter.

In the second, the two teams traded baskets over the first nearly 3 minutes of action, as Tech trailed 22-20 with 7:15 left in the period.

Over the final three minutes of play, Tech held Iowa State scoreless, using back-to-back jumpers from Rhyle McKinney to pull to within 33-31 after two.

Following the break, the two baskets from Tofaeono, gave Tech its lone lead of the contest at 35-33.

Iowa State seized control of the game down the stretch of the third period, scoring 22 of the final 28, to take a 54-41 lead into the fourth.

In the end, the first place Cyclones cruised to a 71-55 victory.

INSIDE THE BOXSCORE:
• Gray scored a season-low 9 points Saturday, marking the first time Gray did not reach double figures against a ranked opponent.
• After shooting 14-of-29 in the first half, Tech shot just 10-of-32 in the second half.
• Iowa State hit eight 3-pointers Saturday, compared to just two for the Lady Raiders.
• The points in the paint were even at 30-all.
• Tech shot just one free throw in the first three quarters and just seven for the game.
• Iowa State was a perfect 11-of-11 from the line.
• Tech did outrebound Iowa State 32-31.

COACH SPEAK (HC KRISTA GERLICH):
“Iowa State is a really good basketball team that is dangerous in so many different ways. In the first half I thought we were able to defend them in a way that we weren’t able to the first time around, and we made it difficult for them to get into a good rhythm. Our kids really battled and competed well. We didn’t play perfectly, we made some mistakes and didn’t get some looks that we wanted to offensively, but we gave ourselves a chance to win the game. We know how good Iowa State is in the third quarter and they were good again today. We didn’t handle that as well as we wanted to and they were able to extend their lead to a point where we couldn’t quite dig out of because it’s really difficult to do that against Iowa State. I’m really proud of kid’s fight and the way we compete the whole night. Iowa State is a great basketball team and coach Fen

ON THE CROWD:
“Ames, Iowa is a very tough place to play. I never played here during my career at Tech, but I remember when I was an assistant under coach [Marsha] Sharp we came here when we were No. 1 in the country and it was packed. It was so incredibly loud and such a difficult place to play. I just wanted to commend Iowa State and its fans for loving women’s basketball, because we’ve had an environment like that at Texas Tech, and that’s what we’re trying to bring back. I told our kids I was so excited for them to get to play in this kind of an environment because it’s special when you play in front of fans that really understand the game and appreciate the game. Our fans are the same way. We need to win more to get more of them to come to games, but the ones that come are fantastic.”

UP NEXT:
Tech returns to United Supermarkets Arena for its final home game of the 2021-22 season. Prior to the 7 p.m. matchup, the Lady Raiders will honor their three seniors.