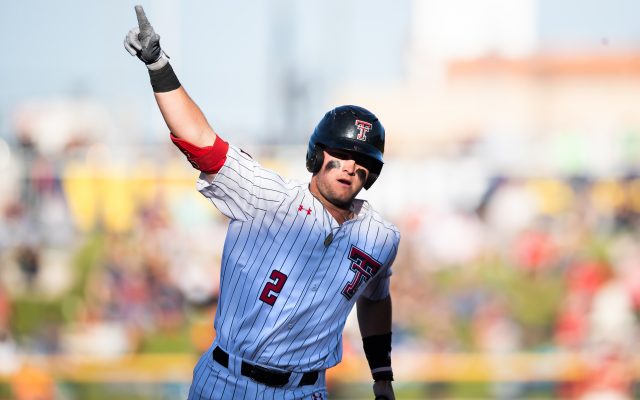 LUBBOCK, Texas – The wait was worth it. No. 11 Texas Tech baseball exploded for four home runs within the first three innings to overpower Oklahoma, 14-4, in a midweek non-conference matchup between the two Big 12 clubs at HODGETOWN in Amarillo, Texas.

Making their first appearance in Amarillo since 1979, the Red Raiders (31-11) slugged four home runs in the first three innings and built an 13-2 lead through five on their way to improving to 8-0 in midweek games this season.

It was the first of four contests with the Sooners (22-21) this season, who the Red Raiders will square off with once again next week with a three-game series in Norman. Tech has now won six of its last seven matchups against OU.

Tech came into the contest ranked No. 12 in the country in home runs and certainly flexed its muscle yet again. It marked the sixth time this season Tech has hit at least four home runs in a game, leading to the eighth game this season that Tech has scored at least 14 runs.

Cole Stilwell hit two home runs and matched his career high with four RBI to lead the Red Raiders at the plate. He connected on a two-run shot in the first and another in the third. Jace Jung and Braxton Fulford also went deep in the third with back-to-back solo shots.

The middle part of the lineup did the majority of the damage for Tech as Cal Conley joined Stilwell, Jung and Fulford in recording multi-hit games and scoring multiple times. The four Red Raiders combined for nine of the team’s 10 hits, nine RBI and nine runs. Leadoff hitter Dru Baker added an RBI and two runs scored at the top of the lineup.

Chase Hampton (2-0) earned the win in a scheduled short start for Tech. He allowed two runs on five hits and commanded the zone with only one walk allowed to his three strikeouts. He was followed by six different pitchers out of the bullpen, including Kurt Wilson, who pitched a scoreless seventh.

Hometown product Max Marusak brought the crowd to its feet with one of several impressive defensive plays for the Red Raiders on Tuesday. He ran down a foul pop-up for an acrobatic catch after being inserted in left field in the seventh inning. He followed by leading off the next frame with a rocket to deep center that was tracked down at full sprint by Sooner center fielder Kendall Pettis.

Oklahoma starter Christian Ruebeck (0-1) lasted just 2.0 innings in the start as Tech jumped on the right-hander early. Tech got on the board in the first, and Cal Conley’s RBI double put it up 2-0. Stilwell followed with a bomb to left field that doubled the lead to 4-0.

The Sooners went to the pen to start the third, but the Red Raider bats stayed hot as Jung hit an opposite-field home run and Fulford followed with back-to-back solo shots. Conley doubled for the second time, setting up Stilwell for his second two-run blast of the evening.

Tech piled on five more runs in the fifth to stretch its lead to 13-2. With two outs in the inning, Tech drew six consecutive free passes and had three runs on the board before Jung’s two-run single capped off the five-spot.