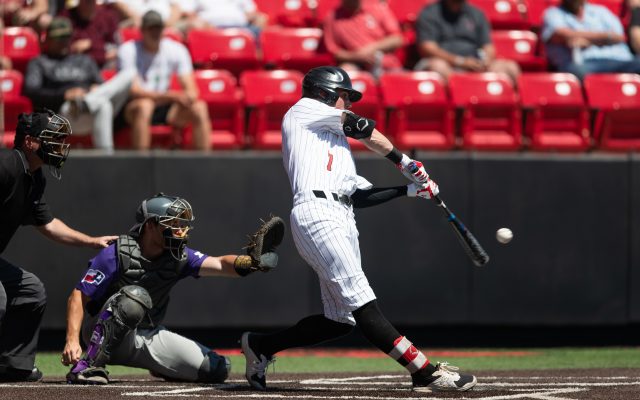 LUBBOCK, Texas – Jace Jung connected on two of his three home runs as part of a nine-run sixth inning Sunday afternoon as No. 8 Texas Tech won the rubber match against No. 10 TCU following a 17-7 run-rule victory inside Dan Law Field at Rip Griffin Park.

The Red Raiders (22-7; 5-4) homered five times in the win as Jung drilled solo shots in the second and sixth innings and then powered a three-run bomb over the fence in right in his second at-bat of the sixth. Cole Stillwell followed Jung’s second home run in the sixth with a solo blast of his own, while Cody Masters drilled a towering three-run homer over the wall in center as part of a key four-run fourth.

The three-homer game capped a strong series for Jung, who finished 3-for-4 with a career-high matching five RBI at the plate Sunday. He finished the weekend hitting 7-for-13 overall with nine RBI. Sunday was his second three home-run performance of the season as he previously went deep three times just over a week ago in the series opener at Kansas State. Jung wrapped the weekend tied for the national lead at 15 home runs already this season.

Besides Jung, Tech had four other Red Raiders with multi-hit games as Braxton Fulford was 2-for-5 with a RBI single in the sixth, while Cal Conley was a similar 2-for-5 overall. Dillon Carter, meanwhile, was 2-for-3 on the day, which included a bases-loaded two-run single through the right side that sparked the big sixth inning.

Stillwell and Parker Kelly joined Jung and Carter with multi-RBI games of their own as Stillwell previously drove a RBI double to left in the fourth, while Kelly drew a bases-loaded walk in the second and then a RBI double of his own an inning later.

TCU had cut what was an 8-1 deficit to only three runs in the fifth after a four-spot that featured a Gray Rodgers three-run homer. The Horned Frogs had three home runs of their own in the loss as Elijah Nunez drove a solo shot to right field in the third, while Austin Henry connected on a two-run shot as part of a pinch-hit opportunity in the seventh.

Tech bounced back with its nine-run sixth that matched its most runs in an inning this season as the Red Raiders previously scored nine in the fifth inning of its March 26 win over South Florida. It was the most runs in an inning versus a Big 12 foe since Tech exploded for 13 runs in the fourth against Kansas in 2019.

The big day at the plate gave Tech’s bullpen plenty of room on a day where starter Brandon Birdsell was forced to depart late in the third inning due to an injury. Hayde Key (2-0) was credited with the win as he threw a shutout sixth inning following a leadoff double to start the frame.

TCU starter Johnny Ray (2-2) earned the loss after giving up six runs off three hits and four walks over only 2.1 innings. The Horned Frogs turned to five relievers out of the bullpen from there, all of which surrendered at least one earned run.

Tech had not previously run-ruled TCU (22-9; 7-2) over the course of the 177-game series against the Horned Frogs, who boasted a 11-game winning streak and wins in each of their first seven Big 12 contests prior to Saturday’s extra innings walk-off victory. The Red Raiders have now won four of the last five regular-season series against TCU.