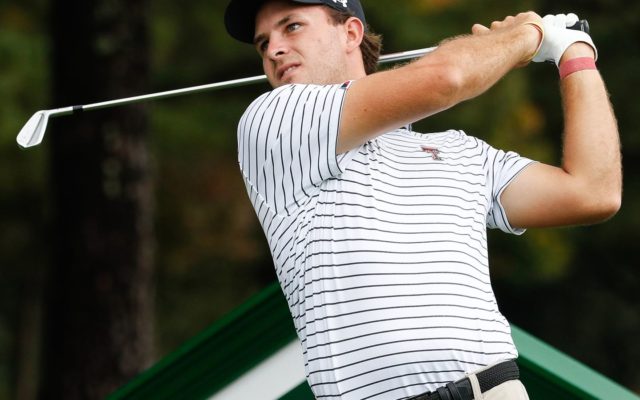 ATLANTA, Georgia – Texas Tech sophomore Garrett Martin opened the East Lake Cup by shooting 2-under-par on Monday to lead the Red Raiders during the stroke-play portion of the three-day event at the East Lake Golf Club. The remaining two days of the tournament will shift to match play with Tech as the third seed.

The Red Raiders and Pepperdine will now meet up in match play on Tuesday in the 2-3 pairing, while Oklahoma will take on Texas. Baard Skogen will begin the day for Tech with a 12:50 p.m. matchup while Andy Lopez will tee off last at 2:10 p.m. The GOLF Channel will broadcast the tournament from 2-5 p.m. on Tuesday and Wednesday.

Martin finished his stroke play round at 2-under after making five birdies on Monday, while Skogen shot 1-under to finish tied for seventh overall. Martin’s round of 70 put him three strokes behind Patrick Welch who won the individual title by shooting 5-under. Lopez shot even-par with three birdies on his card and JP Roller was a 1-over and Markus Braadlie 2-over. Roller made four birdies in his round, while Skogen made the team’s lone eagle with a 3 on the par-5, 584-yard finishing hole. Skogen was 3-over through 13 holes before birdieing 13 and 14 and then making eagle on No. 18.

The Red Raiders shot 2-under as a team which put them behind Oklahoma and Pepperdine in the team standings. The Sooners finished stroke play at 10-under and Pepperdine shot 3-under. Texas finished its round in fourth after a 288, even-par total. Along with Welch, OU’s Quade Cummins finished tied for second at 3-under with Pepperdine’s RJ Manke.

The tournament format is modeled after the NCAA Championships, consisting of an opening round of stroke play to determine an individual male and female champion, and to assign seeding for the following two days of match play. GOLF Channel’s live tournament broadcast team will be anchored by Bob Papa, Curt Byrum and Steve Burkowski in the broadcast booth. Billy Ray Brown also will contribute to coverage as an on-course reporter.

The East Lake Cup has become an annual staple on college golf’s fall calendar, traditionally reconvening the semifinal teams from both the women’s and men’s NCAA Championships from earlier in the year. As a result of COVID-19 and the 2020 NCAA Championship being canceled, the field this year will include the top-four ranked women’s and men’s golf programs (competing this fall), based on the final Golfstat rankings published on March 19. The 2020 East Lake Cup also will be contested without spectators.

Male winners of the stroke play portion at the East Lake Cup include Scottie Scheffler (2016) and Viktor Hovland (2018), each of whom returned to East Lake last month as two of the 30 players competing in the PGA TOUR’s season-culminating TOUR Championship. Notably on the women’s side, Andrea Lee won the individual format in 2016 as a freshman, and is currently 48th in the Race to the CME Globe standings while competing in her rookie season on the LPGA Tour.

The Tom Cousins Award is an annual recognition at the East Lake Cup, presented to an outstanding male and female golfer who exemplify the values of the East Lake Foundation: exceling in academics and engagement in his or her community. The award – presented on Monday night of tournament week – is named for Atlanta philanthropist Tom Cousins, founder of the East Lake Foundation, who led the transformation of a community in despair into a thriving neighborhood which has become a national model for community redevelopment through Purpose Built Communities.