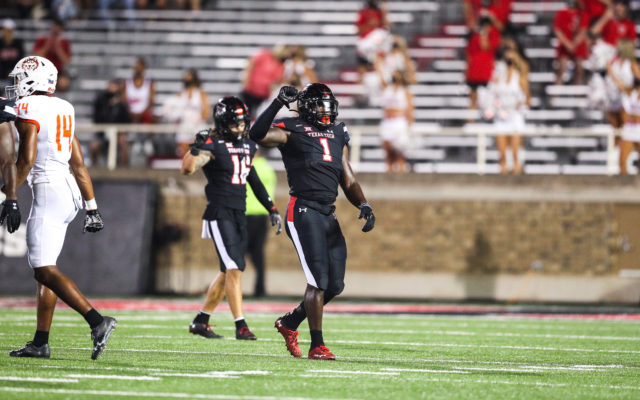 LUBBOCK, Texas – Texas Tech junior linebacker Krishon Merriweather was tabbed the Big 12 Defensive Player of the Week on Monday after the transfer led the Red Raiders with a league-high 12 tackles in a win over Houston Baptist.

Merriweather’s debut marked the first time a Red Raider newcomer had recorded double digits in tackles during a season opener dating back to 2000. His total matched the single-game high among power-five players and ranked tied for fourth nationally in tackles per game.

Houston Baptist was limited to only 28 rushing yards in the game, the fewest for a Tech opponent since Northwestern State recorded only 13 yards on the ground to open the 2012 season. Merriweather recorded eight of his 12 tackles on the night via running plays.

The Huskies scored on only one of their three appearances in the red zone thanks in part to Merriweather, who helped stuff a Jerreth Sterns fourth-down rushing attempt just before halftime, giving the Red Raiders the ball back at their own 1-yard line. The stop helped Tech maintain a 21-10 lead heading into the break.

Tech eventually topped Houston Baptist, 35-33, en route to opening its home slate with a win for the 21st-consecutive season. It also marked the 17th time in the past 18 years the Red Raiders have opened their season with a victory.

This marks the fourth-consecutive season a Red Raider linebacker has garnered the Big 12’s top defensive honor as Dakota Allen claimed the accolade in both 2017 and 2018, while Jordyn Brooks was recognized on Oct. 7 of last year. Both Allen and Brooks are currently part of NFL 53-man rosters with the Jaguars and Seahawks, respectively.

Merriweather and the Red Raiders are in the midst of their first of three open weeks on the 2020 schedule as Tech opens Big 12 play Sept. 26 against in-state rival Texas. Kickoff versus the Longhorns is set for 2:30 p.m. on FOX and the Texas Tech Sports Network.