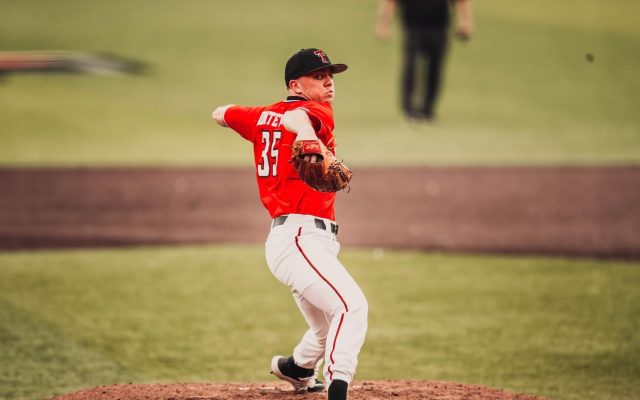 After putting an offensive explosion on Friday, Monteverde stole the show on Saturday as the graduate transfer allowed just two base runners in an efficient 7.0 innings of work. The Red Raiders opened up a 3-0 lead in the fourth inning and added a run in the sixth, two in the seventh and two more in the eighth to cruise to their second consecutive win.

Freshman Brendan Girton came on to record the final six outs for the Red Raiders as he added three strikeouts to the tally, giving Tech 12 for the game. Tech issued only one free pass in the contest, with that coming on a hit-by-pitch in the ninth inning.

Offensively, four Red Raiders recorded multi-hit games, led by Cal Conley, who went 3-for-5 with an RBI double and a run. Conley has posted multiple hits in all five games this season, including consecutive games against the Huskies with three hits.

Cody Masters received his first start of the year and went 2-for-4 with a career-high two doubles. He gave Tech a lift from the bottom of the lineup, driving in a pair of runs and scoring twice.

Nate Rombach had his third multi-hit game in four starts this season, finishing 2-for-4 with a double and two RBI. He got the Red Raiders started in the fourth with an RBI single before coming around on a two-out, two-run double from Masters that made it 3-0.

Dru Baker went 2-for-5 at the top of the lineup and was responsible for a pair of runs coming home. Baker blasted a single in the sixth that bounced off of the Husky center fielder and allowed Masters to come around. He also reached on a bunt single in the eighth that brought in Masters again as the throw from the pitcher got past the first baseman.

Tech’s three-run fourth got started on a 10-pitch at bat from Wilson that resulted in a walk. With one away, a wild pitch moved Wilson to second before Rombach singled into left to bring Wilson to the plate. Braydon Runion then doubled to put men at second and third, and Masters drove them in with a grounder into center that he turned into a double.

The Red Raiders carried a 3-0 lead into the sixth, when Baker hit a liner to center that bounced off the front of the HBU center fielder and allowed Masters to score from first. The 4-0 lead expanded an inning later as Dylan Neuse drew his second walk of the day and promptly stole second and third before scoring on a double from Conley. After Conley found the gap in right center, Rombach did the same to trade places and make it 6-0.

The Huskies got on the board in the eighth on a Sebastian Trinidad infield single that plated a run from third. The Red Raiders, as they often have throughout the early stages of the season, responded in their next at bat as Masters led off the bottom-half of the eighth with a double, scored on the bunt single from Baker and then Baker crossed home on a wild pitch.