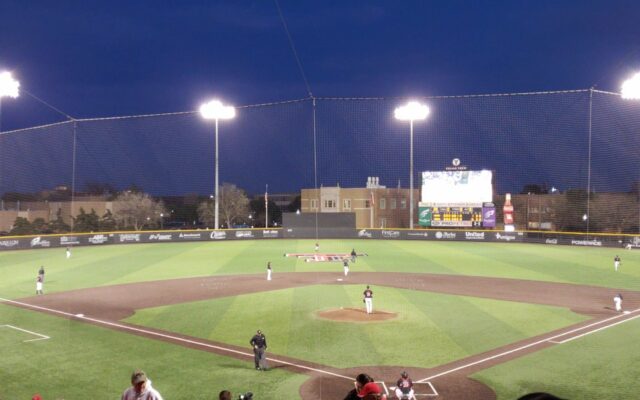 MORGANTOWN, W. Va. – No. 8 Texas Tech baseball jumped on West Virginia early and rode a terrific start from Patrick Monteverde to a series-opening 7-2 win over the Mountaineers on a brisk Friday night at Monongalia County Ballpark in Morgantown, West Virginia.

Monteverde was spectacular in delivering 7.0 scoreless innings for the Red Raiders, who carried a shutout into the ninth. The Pittsburgh native allowed just two hits and struck out five to earn his sixth win of the season in front of a large contingent of family and friends who made the short trip.

His battery mate, Braxton Fulford, carried the Red Raiders offensively as the Lubbock native went 3-for-4 with a home run, a triple and four RBI, finishing a double shy of the cycle.

Fulford helped the Red Raiders (25-7; 6-4) get on the board in the first inning with an RBI triple that plated leadoff man Easton Murrell. Jace Jung followed with a double off the wall to make it a 2-0 game after one.

Tech extended its lead to 5-0 through five innings and 7-0 through seven in a game that Monteverde seemed in total control. The Mountaineers threatened in the second as Monteverde, who had walked six batters all year, allowed three free passes, but he battled out of it with a strikeout and a soft come-backer. Monteverde retired the side in order four of the seven innings he pitched.

Meanwhile, the Red Raider offense stayed on attack as it added runs in the fourth through the seventh innings. Cody Masters drove in a run in the fourth with what appeared to be an RBI triple, but he was called out at second on an appeal. Fulford connected on his two-run shot in the fifth and followed with an RBI single in the next inning.

Dru Baker, who returned to the lineup after missing six games, made an impact on the bases in the seventh inning with a walk and a stolen base before scoring on a high throw to second after a wild pitch. He finished the night with a pair of stolen bases.

Josh Sanders finished out the last two frames for the Red Raiders. Parker Kelly and Jace Jung turned a double play to end the eighth, but the Mountaineers (13-15; 4-6) found some life in the ninth with a pair of runs on four hits.

The Red Raiders will look to clinch the series win on Saturday afternoon at 3 p.m. CT. Right-hander Micah Dallas (1-2, 3.38 ERA) will be on the mound for Tech against another left-hander in Adam Tulloch (0-3, 7.03 ERA) for WVU. Coverage will be provided on Big 12 Now on ESPN+ and the Texas Tech Sports Network.