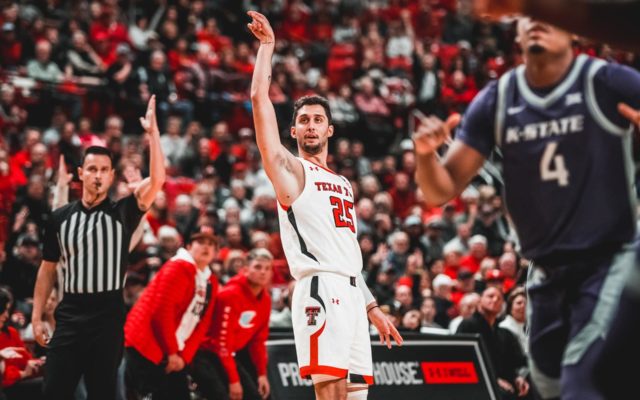 “I just think tonight’s game is another indication how good our league is,” Texas Tech head coach Chris Beard. “Kansas State has had its share of adversity this year no doubt but the game was everything we thought it would be. That’s a team that could beat anybody in the country on any given night. So, you know, tough game for us tonight. I think we understood what was at stake got to protect your home court to accomplish the things that we want to accomplish here down the stretch. I thought when it mattered most we dug in and had some separation. That’s a team no one will want to face in Kansas City.”

Moretti scored 15 of his 18 points in the second half after going 3-for-6 on 3-pointers and 4-for-4 from the line in the final 20 minutes to help Tech build on it 39-35 halftime advantage. A junior from Italy, Moretti is now 205-for-227 from the line and has made 158 3-pointers in his career after having his fifth game this season with four 3-pointers. Ramsey also had a big second half, finishing with 10 points in the second half and 17 for the game. He was 5-for-6 from the line and hit two 3-pointers, while Edwards hit two 3-pointers and finished the game 5-for-9 from the field. Edwards, Ramsey and Moretti all had four assists in a game where the Red Raiders assisted on 18 of 23 shots.

Xavier Sneed led Kansas State with 15 points with two 3-pointers and Antonio Gordon came off the bench to score 14 points. Gordon would hit two late 3-pointers to cut KSU’s deficit to 64-59 before a Ramsey dunk and a pair of free throws capped the win for the Red Raiders. Ramsey is now third in the Big 12 in scoring this season at 15.8 points per game and leads the conference at 44.8 percent on 3-pointers after hitting at least two for the seventh straight game.

Texas Tech led by as many as 11 at halftime but took only a 30-27 advantage into the locker room after Kansas State went on a 10-2 close out the half. The Wildcats were 5-for-5 on their final five shots, while the Red Raiders were limited to one make in the final four minutes. Edwards led Tech with nine points in the first half after going 3-for-5 from the field, while Ramsey had seven and McCullar scored five. The Red Raiders led 5-0 to start the game with McCullar making an and-one on the first possession followed by a Holyfield layup. Tech went on a 10-0 run to take a 20-10 lead on an Edwards layup and extend it to 26-15 on a pair of Edwards free-throws. Ramsey and Moretti hit back-to-back 3-pointers off assists from Clarke during the run and led 28-17 on a Clarke layup with four minutes remaining in the half.

The Red Raiders improved to 63-7 at home under Beard in the past four years and are now 13-7 all-time against KSU in Lubbock. The Wildcats lead the all-time series 24-20.