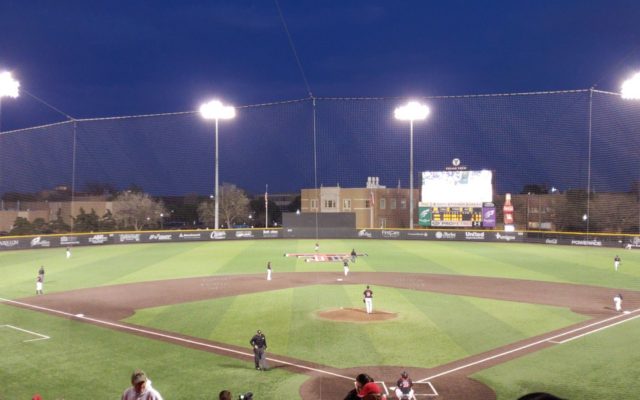 MORGANTOWN, W. Va. – No. 8 Texas Tech baseball battled back from a three-run deficit to carry a lead into the eighth, but West Virginia pulled even before walking it off in the ninth for a 6-5 win at Monongalia County Ballpark to even the three-game set at one apiece.

Tech entered the contest 18-1 when leading after six innings this season, and the Red Raiders were able to score five runs in the middle innings to take a 5-4 lead into the seventh.

A walk followed by back-to-back singles allowed the Mountaineers (14-15; 5-6) to tie it in the eighth before Ryan Sublette recorded consecutive strikeouts to send it to the ninth. With the bases loaded and nobody out in the ninth, Mikey Kluska sent a hard ground ball to first that sent Cole Stilwell to the ground to field, and his throw home to get the force was not in time as Kevin Brophy scored the winning run.

It was a frustrating night for the Red Raiders (25-8; 6-5), who, despite being outhit 11-6, drew 13 free passes and threatened for several big innings. The big hit never came, however, as Tech finished 1-for-11 with runners in scoring position.

After jumping out to first inning leads in five straight games, the Red Raiders got off to a shaky start Saturday with three early errors that helped the Mountaineers (14-15; 5-6) build a 3-0 lead after two.

Starter Micah Dallas would battle and allow just one more run as he pitched into the sixth inning, striking out three and issuing no walks. Ryan Sublette (4-1)took over for him and retired the first six he faced until the one-out walk in the eighth that ended up scoring to tie the game.

The Mountaineers trotted out five different pitchers in the contest with Jacob Watters (2-0) earning the win. Tech ended starter Adam Tulloch’s day in the fifth after getting its first two men aboard on free passes with Braxton Fulford, who went 3-for-4 on Friday, coming to the plate.

Easton Murrell and Cal Conley led the Red Raiders at the plate with two hits each. Jace Jung went 1-for-3 with the go-ahead walk in the sixth, while Cody Masters reached base all five times he came to the plate with three walks and two hit by pitches.