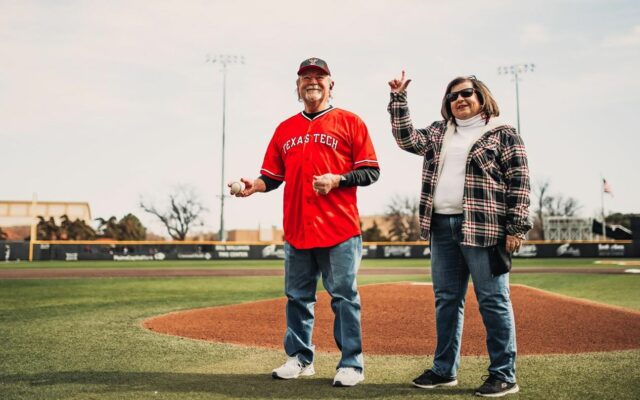 Texas Tech was able to begin construction on the $14.5 million project after several lead gifts, including a contribution from Royce and Linda Lewis and Capital Mortgage Serviced of $2.5 million. For their generosity, Texas Tech will name the indoor infield and hitting space inside the new team facility the Royce and Linda Lewis Development Center. The Lewis family was also honored prior to first pitch Tuesday in Texas Tech’s home opener versus Dallas Baptist.

“We are extremely grateful for the tremendous support we have received for this project,” Director of Athletics Kirby Hocutt said. “We firmly believe this will be one of the premier team facilities in college baseball, which will only continue our investment into Coach Tadlock, his staff and more importantly, our student-athletes. We are grateful for the Lewis and Griffin families for their lead gifts and so many other donors who stepped up to help us with the project.”

The project, funded through philanthropic gifts to The Campaign for Fearless Champions, will represent a significant investment into a Red Raider baseball program that has appeared at the College World Series four times and won three Big 12 titles in the nine seasons under head coach Tim Tadlock.

In order to not displace the Red Raiders during their season, Texas Tech will split the project into two phases. The initial phase will see construction take place to expand the existing facility, allowing the Red Raiders to continue to use their locker room and present indoor space with limited restrictions. Texas Tech will then renovate the current team facility in anticipation of a fall of 2023 completion date.

“We can’t thank those who contributed to this facility enough for their generosity in helping us continue to build this baseball program,” Tadlock said. “We will always prioritize our student-athletes here at Texas Tech, and this investment is one that will impact our program for years to come. Texas Tech is committed to winning championships, and our staff and program are fortunate to receive tremendous support from our administration, led by Kirby Hocutt, as well as our alumni and supporters.”

As part of its initial plans, the new facility will prioritize player development, a key component for the Red Raiders under Tadlock, with an enlarged indoor training facility that features adjustable netting to allow for indoor infield work. Student-athletes will have an expanded film room nearby to analyze their swing or watch film of a future opponent.

The team clubhouse will remain in its present location down the left-field line but will greatly expand as part of the new facility. The project will provide the Red Raiders several upgrades from its current facility, including a first-class locker room as well as a team lounge, nutrition area, video area and expanded athletic training space.

Tadlock and his staff will also move their day-to-day operations from their current location in the club area of Rip Griffin Park to the new baseball team facility. The project entails adding office space for Tadlock and his entire staff as well as a new coaches’ locker room.

The baseball team facility was funded exclusively through contributions to The Campaign for Fearless Champions. For more information regarding the campaign, please visit www.Give2Tech.com/athletics.