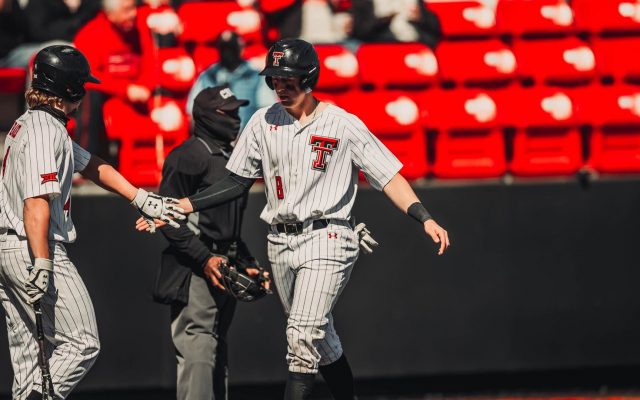 LUBBOCK, Texas – No. 10 Texas Tech baseball completed a three-game sweep of Houston Baptist with an 11-2 win on Sunday at Rip Griffin Park.

Mason Montgomery (1-0) delivered his second consecutive strong start to open the year, allowing one run on two hits over 5.0 innings, and an eight-run fourth inning gave the Red Raiders (3-3) all the run support it needed to close out the Huskies (1-5).

HBU grabbed its only lead of the series on a solo home run in the top of the fourth, but the lead was short-lived as Kurt Wilson’s two-run double ignited Tech’s biggest inning of the season.

Tech got its first two men aboard, and a fielder’s choice off the bat of Cal Conley ended up being thrown into the outfield, allowing Dylan Neuse to score and tie the game at 1-1. Wilson immediately followed with his two-bagger to the gap, and Parker Kelly made it 4-1 with an RBI single. Tech went on to add four two-out RBI from a Jace Jung single, a Dylan Neuse two-run triple and a Cole Stilwell single.

After HBU plated a run in the seventh, Tech responded in the bottom half of the frame with two runs to make it 10-2, and then added one more in the eighth. The Red Raiders finished the weekend outscoring the Huskies 37-6 in the sweep, recording double-digit hits in all three contests.

Neuse, who scored twice in the eight-run fourth, broke out of a funk with a 2-for-4 effort, including a two-run triple in the fourth inning. He finished with a season-high three RBI as he added an RBI single in the eighth.

Three other Red Raiders had multi-hit games in Jung, Stilwell and Kelly. Meanwhile, Nate Rombach continued to haunt HBU as he connected on his second home run of the weekend with a two-run opposite-field blast in the seventh. He has five home runs and 14 RBI in five games against the Huskies since 2020.

Holding an 8-1 lead, Tech turned it over to the bullpen in the sixth and three Red Raiders combined to allow one run on three hits over the final four innings. Connor Queen received 2.0 innings and yielded back-to-back singles in the seventh that scored a run. Levi Wells tossed a scoreless eighth, and Ryan Sublette closed it out in the ninth.

HBU was led by Nathan Soriano, who hit the solo home run, and Jake Miller, who was the only Husky to post a multi-hit game, going 2-for-4. Soriano, the leadoff hitter, hit safely in all three contests. Starter Austin Spinney suffered the loss, allowing seven runs (three earned) on five hits in 3.2 innings.