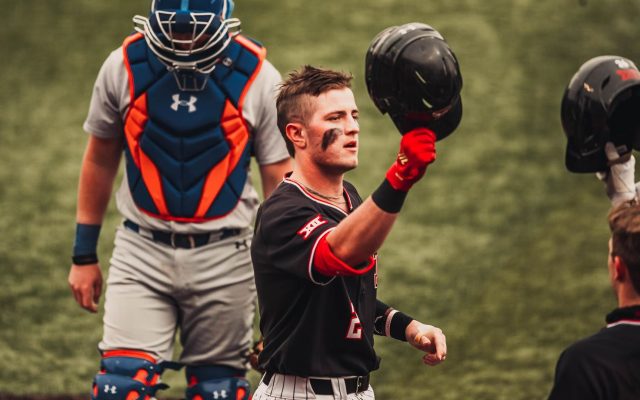 LUBBOCK, Texas – The offensive fireworks came early and often for No. 10 Texas Tech baseball in its home opener as the Red Raiders went yard six times and racked up 21 hits on their way to an 18-3 run-rule victory over Houston Baptist Friday afternoon at Rip Griffin Park.

Tech (1-3) homered in four consecutive innings from the second to the fifth, and all nine Red Raider starters scored a run as Tech jumped emphatically into the win column in its first home game since March 8 last season.

A scoreless tie going into the bottom of the second didn’t stay scoreless for long as Tech put up eight runs in the second, followed by seven in the third to bust open a 15-0 lead through three. The Red Raiders and Huskies (1-3) traded three runs over the fourth and fifth frames before the game ended in a run-rule victory after the Huskies were retired in the seventh.

Nate Rombach got the scoring started with a two-run home run in the second, part of a three-hit, three-RBI performance He added an RBI double an inning later and then singles and scored in the fifth.

Cole Stilwell also went deep in the second inning, clearing the bases with his first career grand slam. It was the first grand slam for the Red Raiders since Dylan Neuse’s against Baylor in 2019. Stilwell and Jace Jung led the Red Raiders with four RBI on the day

It was the Jung show in the third and the fourth as he homered in both frames, starting with a three-run blast in the third that made it 11-0. He followed with a leadoff homer in the fourth that answered the first run of the day by HBU and pushed the Tech lead to 16-1.

Cal Conley also left the ballpark in the third inning, part of another multi-hit game for him. Conley, who finished 3-for-4 with a homer, a double, two RBI and three runs, has recorded multiple hits in all four games this season and in 11 of his 22 career games.

Overall, eight of nine Red Raiders in the starting lineup had multi-hit games as Baker set the table in the leadoff spot, going 3-for-5. Kurt Wilson also had a pair of hits and an RBI, Braxton Fulford went 2-for-2 with an RBI and two runs, and newcomer Braydon Runion hit his first career home run in a 2-for-4 showing.

On the mound, Brandon Birdsell made his first collegiate start after appearing in eight games out of the bullpen for Texas A&M in 2019 and one for the Red Raiders in Arlington. Birdsell tossed 4.1 innings and earned the win, allowing three runs on five hits with two strikeouts. Nick Gorby, a freshman who made his first appearance, and Chase Webster followed with 2.2 innings of shutout ball.

Tyler Zarella (0-1) took the loss for HBU. The Huskies were led at the plate by leadoff hitter Nathan Soriano, who went 2-for-4, and three-hole hitter Brandon Bena, who went 1-for-2 with an RBI and a run.