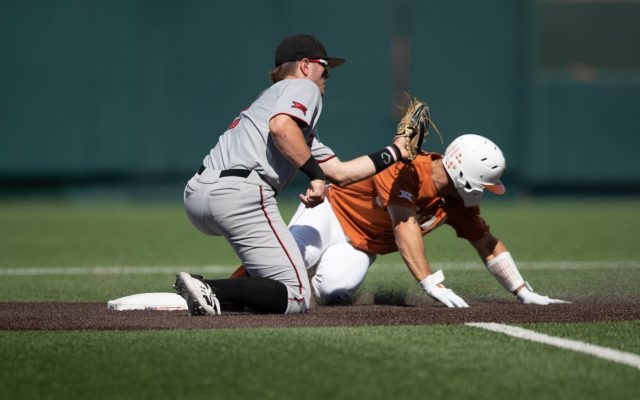 AUSTIN, Texas – After an emotional series-clinching victory to start the afternoon, No. 11 Texas Tech dropped an 11-3 decision to No. 3 Texas in the series finale Sunday at UFCU Disch-Falk Field in Austin.

Texas overcame a 2-0 deficit early on with four runs in the second and held a 7-2 advantage in the seventh when Douglas Hodo III connected on a grand slam to make it a nine-run ballgame.

Longhorn reliever Pete Hansen (5-1) limited the Red Raiders to one run on seven hits over 7.2 innings of relief, entering the game in the top of the first for starter Kolby Kubichek and exiting with an 11-2 lead in the eighth.

The Red Raiders opened the scoring four batters into the game as Braxton Fulford drew a bases-loaded walk. Texas went to the bullpen and escaped without any further damage thanks to a 5-2-3 double play for the first two outs and a fly ball to center for the third.

Braydon Runion and Dru Baker doubled in the second to give Tech a 2-0 lead before the Longhorns responded with four runs in the home half of the second to move in front, 4-2. Designated hitter Ivan Melendez led off with a fly ball to right that Easton Murrell lost in the sun, and an errant throw to the infield allowed Melendez to come all the way around. A Trey Faltine two-run double gave Texas the lead.

The Longhorns extended their lead with a run in the fourth as Tech cycled through four different pitchers in the frame before Braxton Fulford threw out a runner at second to end the inning. Tadlock sent eight pitchers to the mound overall as Montgomery (2-3) allowed five runs in 3.2 innings, suffering his first loss in four starts.

Baker finished the game 3-for-5 with a double and two RBI. The sophomore doubled in all four games this week to help the Red Raiders compile a 3-1 record. He leads the team with 19 multi-hit games this season and finished with six extra base hits overall this week.