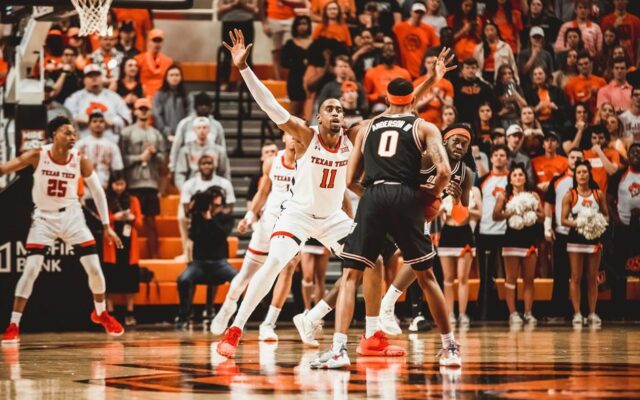 STILLWATER, Oklahoma – Kevin Obanor recorded a double-double with 16 points and 10 rebounds, but it wasn’t enough as No. 12 Texas Tech took a 52-51 loss to Oklahoma State in the regular-season finale on Saturday at Gallagher-Iba Arena.

OSU became the first team to outscore Tech in the paint in a game this season after owning a 26-22 advantage. The Cowboys also had a 41-37 rebounding advantage, including a 16-12 margin on the offensive end.

Obanor recorded the 32nd double-double of his career after scoring 16 points with three 3-pointers and grabbing 10 rebounds. It was his second double-double of the season. Williams fouled out in the final minute of the game after scoring 13 points in the game. It was his 17th game in double figures in Big 12 play this season. Obanor and Williams were the only two players in double figures for Tech which finished the game shooting 35.2 percent and 7-for-21 on 3-pointers. Adonis Arms added seven points and six rebounds, while Terrence Shannon, Jr. led the team with four assists and also scored six points.

Rondel Walker led OSU with 12 points and six rebounds, while Thompson finished the game with 11 points and three assists. Thompson was 0-for-4 on 3-pointers before hitting the game-winner. Moussa Cisse finished the game with five blocks and 10 rebounds in a game where OSU had eight blocked shots.
Obanor had 13 points and six rebounds at halftime with the Red Raiders and Cowboys tied at 27 through 20 minutes. Obanor was 2-for-3 on 3-pointers and also went 5 of 6 from the free-throw line to score nearly half of Tech’s points.

The Red Raiders had six players score in the opening half with Arms having five on 2-for-4 shooting. Shannon hit one 3-pointer and had three points. Tech finished the opening half shooting 4 of 9 on 3-pointers and was 5 of 8 at the line. The team had nine turnovers, but had also taken the ball away from the Cowboys 11 times going into the locker room. Walker was leading the Cowboys with nine points after going 3-for-3 on 3-pointers in the half.

KEY MOMENTS
Second Half
Shannon hit a 3-pointer on the first possession of the half to give Tech a 30-27 lead…. He had six points after the shot that made Tech 5 of 10 from beyond the arc
Tech led 34-31 on a fall away jumper in the lane by Williams (17:13) to give him six points… Another highlight-reel dunk by Arms pushed the lead to 36-33 (16:15)
Warren got inside for a layup after a Williams dunk to give Tech a 42-37 lead with 13:39 remaining… Williams had 10 points after his dunk to become the second Red Raider in double figures in the game
Williams and Obanor hit a back-to-back 3-pointers to give Tech a 49-39 lead… It was Tech’s first double-digit lead… Obanor’s 3-pointer pushed the run to 7-0 and gave him 16 points and eight rebounds
OSU was on a 7-0 going into the final media timeout with Tech leading 49-46 (3:18) despite missing its previous six shots
Williams fouled out with 51 seconds remaining in the game and OSU going to the line down one… Walker would hit the free throw to make it a 10-0 run by the Cowboys and tie the game at 49
Warren skied in to tip a missed 3 by Arms to give Tech a 51-49 lead with 28 seconds left… Warren had six pints and four rebounds after the play
Thompson gave OSU a 52-51 lead with a 3-pointer with 19.4 on the clock
First Half
OSU won the tip but committed a turnover on its opening possession of the game… The Cowboys took a 2-0 lead on their third possession after a Cisse layup that followed two offensive rebounds.
Arms scored Tech’s first basket with a 3-pointer on the fourth possession… Warren would give Tech its first lead at 5-4 on the next trip down the court with a layup (16:22)
Tech was on an 8-0 run with Shannon hitting a 3-pointer (15:33) before a Likekele 3-pointer for OSU made it an 8-7 lead for the Red Raiders… Tech started the game 2-for-5 on 3-pointers going into the first media timeout
Williams gave Tech a 12-10 lead with his first basket of the game at the 11:31 mark off an assist from Shannon… Williams was the fifth Red Raider to score in the game
Agbo was the sixth Tech player to score, grabbing an offensive rebound and getting a putback for a 14-12 lead (8:21)
Arms stopped a 7-0 run by OSU with a fastbreak layup (4:26) to cut the deficit to 19-16… Arms had five points
Obanor hit a 3-pointer to tie the game at 19-all with 3:45 remaining until the half… Obanor had five points at that point after getting his first points from the free-throw line
Obanor stopped another 6-0 run by OSU with a 8-0 run of his own for a 27-25 lead… He started with his second 3-pointer and then two free throws… Tech was down 25-24 after his 3-pointer that was followed by two free throws on the next possession… He had 10 points and four rebounds after the two trips down the floor that made it a one-point game
Tech was only tied at halftime one other time this season, going into the break at Texas tied at 28 before earning the win over the Longhorns.