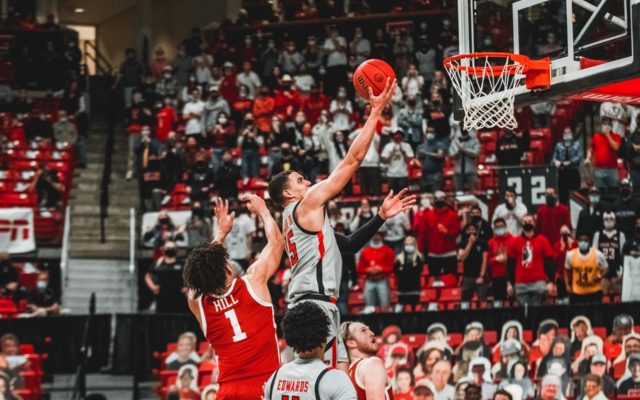 LUBBOCK, Texas – No. 13 Texas Tech dropped out of the top-10 and beat a top-10 team on the same day after earning a 57-52 win over No. 9 Oklahoma on Monday at the United Supermarkets Arena. Terrence Shannon, Jr. led the Red Raiders with 15 points, including hitting four straight free throws in the final minute to help ice the game and sweep the season series against the Sooners.

The Red Raiders (13-5, 5-4 Big 12) led 25-18 at halftime and finished the game holding OU (11-5, 6-4 Big 12) to only 33.3 percent shooting and 6-for-22 on 3-pointers in a defensive battle on ESPN Big Monday. Tech, which fell from No. 10 nationally to No. 13 earlier in the day, responded by knocking off its second top-10 team of the season after also topping Texas when the Longhorns were No. 4. OU was held to its season-low in scoring and had a five-game winning streak snapped with the loss.

“Obviously it was a defensive battle that was ugly in some ways but beautiful in others,” Texas Tech coach Chris Beard said. “It was two teams defending at a high level. Shots weren’t falling for either team but you have to give both defensive units a lot of credit. I thought our guys did a good job in the second half not settling and getting to the free-throw line. I think that was the difference in the game.”

Texas Tech finished the game 18-for-22 at the free-throw line, including going 16-for-20 in the second half. The Red Raiders built a 50-40 lead with back-to-back 3-pointers from Kevin McCullar and Shannon before holding off a Sooner surge.

Shannon finished the game with a team-high 15 points by going 5-for-10 from the field and 4-for-4 at the free-throw line, while McCullar added 13 points, four steals and eight rebounds. Clarence Nadolny came off the bench to record a season-high seven points and Mac McClung added six with all six coming from the free-throw line. Tech finished the game with a 39-32 rebounding advantage, led by Marcus Santos-Silva, Tyreek Smith and McCullar who each had eight rebounds. It was a career-high for Smith who also had two blocks to lead the team.

“Knowing the scouting report and trying to execute on that aspect, competing, and working with each other the whole night,” McCullar said. “Not taking possessions off.”

McClung was held in single-digits for only the fourth time through 18 games after he scored a season-high 30 last Monday at West Virginia and 22 in the win at LSU last Saturday. He leads the team at 16.8 points per game and is now 81-for-98 at the free-throw line after going 6-for-6 against the Sooners.

Umoja Gibson led Oklahoma with 14 points after hitting three 3-pointers, while De’Vion Harmon had 12 and Brady Manek had 11. The Sooners were 18-for-54 from the field in the game and committed 11 turnovers.

“Beard emphasized our defense and said that we needed to pick it up and be competitive,” Shannon said. “I feel like in our last two games we fought and we stayed together and we got stops and that led to us winning.”

Tech has now won 26 games over top-10 teams in program history, including 11 under Beard… The Red Raiders improved to 8-3 at home this season and to 71-12 at home under Beard… Tech has won six of the last seven matchups against OU, including a 69-67 win in Norman on Dec. 22 in the first matchup between the two teams… Tech has now swept the season series against OU three times in program history.

The Red Raiders will return to action against Kansas State at 3 p.m. on Saturday in Manhattan, Kansas before hosting No. 17 West Virginia on Tuesday, Feb. 9 at 8 p.m. in Lubbock. Tech earned an 82-71 win over the Wildcats (5-13, 1-8 Big 12) on Jan. 5 at home in the first matchup between the two teams. Tech is currently 4-1 in road games this season, including a 3-1 road record in conference play.

McCullar and Shannon hit back-to-back 3-pointers to give Tech a 50-40 lead with 3:21 remaining…They were the first two 3-pointers for Tech in the second half.
OU went on a 7-0 run to cut it to 50-47 before a timeout with 1:28 remaining and TTU with the ball… McClung was fouled and hit two free throws to give the Red Raiders a 52-47 lead with 1:13 to play.
McCullar hit a pair of free throws and Shannon a layup (9:20) to give Tech a 37-33 lead after OU had tied the game at 33 with three free throws from Gibson with 12:45 remaining.
The Red Raiders took a 33-28 lead on layups by Smith and Shannon (15:09) after OU had cut it to one.
Tech took a 25-18 halftime lead with McCullar hitting a 3-pointer and Edwards making a second-chance layup in the final minute of the half.
McCullar scored Tech’s first points of the game with a pair of free throws on the team’s fourth possession to tie the game at 2-2… McCullar had a steal that led to him being fouled on a fast break layup attempt.
Nadolny hit a 3-pointer to give Tech a 12-8 lead with 11 minutes remaining in the first half… Nadolny had five points in the first half after a layup gave the team an 18-13 lead with three minutes until halftime.

Texas Tech took a 25-18 halftime lead with McCullar leading the team with seven points and Santos-Silva having seven rebounds. The Red Raiders hit three 3-pointers in the first half with Edwards, McCullar and Nadolny each having one. Edwards had five points at the break, while Santos-Silva had four points and two assists to go along with his seven rebounds. Tech had a 24-15 rebounding advantage at the break and was holding the Sooners to just 25.9 percent shooting (1-for-10 on 3-pointers).