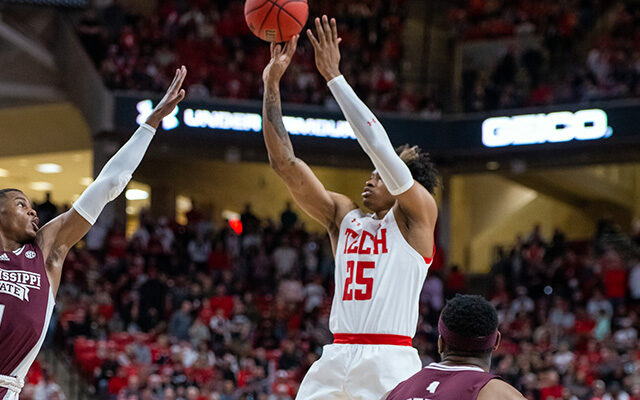 LUBBOCK, Texas – Adonis Arms recorded season-highs with 16 points and seven assists to lead No. 13 Texas Tech to a 76-50 win over Mississippi State in a Big 12/SEC Challenge matchup on Saturday at the United Supermarkets Arena.

The Red Raiders (16-5) improved to 13-0 at home, closed out non-conference play with an 11-2 record and have now won 15 straight non-conference home games. Tech outscored MSU by a 44-16 advantage in the paint and is now 6-3 all-time in the Big 12/SEC Challenge after shooting a season-high 61.7 percent from the field with 20 assists while limiting the Bulldogs (13-7) to only 39.6 percent.

“We told our guys that if we won the rebounding we would win the game,” Texas Tech coach Mark Adams said.They took that seriously and I thought we did an excellent job with offensive rebound and keeping them off the boards. I thought we did a great job of being physical with them and had great intensity on defense throughout the game. It’s always exciting when you can share the ball and spread the points around. It makes it difficult for opponents to scout you and focus on one or two guys. You look down our lineup and we have a lot of guys that can score double figures – nearly the entire team can.”

Arms finished the game shooting 6 of 9 from the field and 3-for-5 on 3-pointers, scoring seven of the first eight points in the game for the Red Raiders. Marcus Santos-Silva had a game-high nine rebounds and also added six points and two assists. Kevin Obanor added 13 points and six rebounds, while Mylik Wilson scored a season-high 23 points after going 3-for-4 from the field and 6 of 6 at the free-throw line. Bryson Williams gave the Red Raiders four players in double figures with 10 points and has now scored in double figures in nine straight games.

Tech matched its season-high of 20 assists on a night where it was 29 of 47 from the field. Arms was one shy of his career-high with his seven assists, while Kevin McCullar had four assists and Williams and Davison Warren had two assists each.

“For me, basketball is about sharing the ball and being a part of my team and having fun out there,” Arms said. “With scoring, I took my chances in the first half. Growing up it was always about being a team player and getting everyone else involved. Coach Adams said we needed to beat this team so I just focused on the defensive end and got those two blocks in there. Marcus and Batcho, and everyone else I fed the ball to just helped me out with the assists.”

Iverson Molinar led MSU with 12 points, while D.J. Jeffries had 11 points and Rocket Watts scored 10. The Bulldogs were 4-for-16 on 3-pointers and 8 of 12 from the free-throw line.

Warren finished the game with seven points, while McCullar had five rebounds, two steals and two points to go along with his four assists. Tech was 5-for-13 on 3-pointers with Arms hitting three and Obanor going 2 of 4 from beyond the arc. Obanor now has made 27 3-pointers this season to lead the team and has made two or more in nine games.

Tech hit eight of its final 10 shots in the first half to take a 37-22 lead into the break. Arms led the Red Raiders with 15 points at the break to match his season-high in scoring, while Warren had five points and Williams, Santos-Silva, Wilson and Batcho each had four. Tech shot 55.6 percent form the field in the first half while holding MSU to 43.5 percent and 0-for-4 on 3-pointers. Arms was 6 of 8 from the field and 3-for-5 on 3-pointers through 20 minutes. Santos-Silva had a team-high five rebounds in a half where Tech owned a 15-12 rebounding advantage and had a 22-6 scoring advantage in the paint.

Mississippi State won the toss and took a 2-0 lead on its first possession with a Molinar basket… Arms answered on the other end for the Red Raiders with a jumper of his own to tie the game
Arms hit a 3-pointer to give Tech its first lead of the game at 6-4 three minutes in before a jumper made it 8-4… He had 7 of Tech’s first 8 points of the game
Wilson capped an 8-0 run by the Red Raiders with a layup off an assist from Santos-Silva for a 10-4 lead
MSU was on a 6-0 run before Warren got to the basket for a layup that gave Tech a 12-9 lead… The Bulldogs tied it at 12 with a Molinar 3-pointer seven minutes into the game
Tech took a 15-12 lead (10:57) on a Santos-Silva layup before another Molinar jumper on the other end
Batcho had a fastbreak dunk assisted by Arms to give Tech a 19-15 lead before Arms bullied his way inside for another layup and a 21-15 lead going into the under-8 media timeout… Arms had nine points after the basket
Tech made six straight baskets and had a 7-0 run going with Arms drilled his third 3-pointer of the game for a 33-20 lead… The run included Williams hitting a runner for a 30-20 lead – the first double-digit lead of the game
Obanor gave Tech a 40-20 lead with his first 3-pointer of the game just two minutes into the second half… It was the first 20-point lead of the game
Tech led 48-31 with Obanor making a layup off an Arms assists to stop a 7-0 run by the Bulldogs… It gave Obanor eight points and Arms six assists with 15 minutes to play
Williams threw down a dunk for a 52-33 lead that also gave him 10 points… It took him into double figures for the ninth straight game
Obanor hit his second 3-pointer of the game for a 59-36 lead… He had 11 points and five rebounds with the basket with 8:30 remaining
A steal by McCullar led to a fastbreak layup by Warren to take Tech’s lead to 63-39 going into the under-8 media timeout… McCullar had made his first basket of the game before the steal and basket that had Tech up 24 which was its largest lead.

The Red Raiders return to action against Texas at 8 p.m. on Tuesday at the United Supermarkets Arena in the first matchup between the two programs this season. Tech swept last year’s regular-season series before the Longhorns took a quarterfinal win in the Big 12 Championship tournament. The matchup marks the return of Texas head coach Chris Beard who led the Red Raiders for the past five seasons.