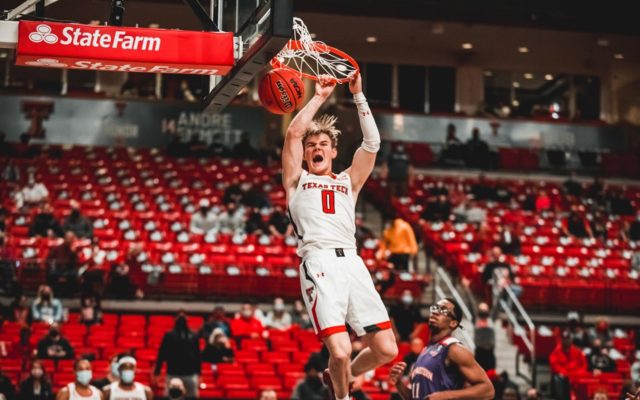 LUBBOCK, Texas – Marcus Santos-Silva recorded a double-double and Mac McClung went for 20 points to help lead No. 14 Texas Tech to a 101-58 season-opening win over Northwestern State on Wednesday at the United Supermarkets Arena.

The Red Raiders won their 22nd straight season opener and are now 5-0 openers under head coach Chris Beard after his team had all five starters score in double-figures and the team shoot 58.3 percent from the field. Tech, which saw all 12 players who played score in the game, never trailed against the Demons and scored over 100 points in an opener for the first time since 2004. The program is now 68-28 all-time in season-opening games.

McClung led all scorers with 20 points after going 6-for-9 from the field, including 2-for-3 on 3-pointers and also knocked down all six of his free-throw attempts. Terrence Shannon, Jr. added 16 points and five rebounds, while Kyler Edwards led the team with six assists and also contributed 10 points and five rebounds. Micah Peavy also impressed, scoring 14 points from the starting lineup in his first collegiate game. A freshman from Duncanville, Peavy scored the game’s first points on a second-chance basket in a game where Tech owned a 51-32 rebounding advantage.

A junior who transferred to Tech this season after two years at Georgetown, McClung scored his 20 points in 20 minutes and also had three steals and three assists. He averaged 14.2 points per game in his career with the Hoyas.

The Red Raiders finished the game shooting 38-for-70 and limited the Demons to 33.3 percent from the field and 5-for-23 on 3-pointers. Santos-Silva dominated the glass, finishing the game with 13 rebounds to go along with 10 points for his first double-double as a Red Raider after recording 10 last year as a junior at VCU. Santos-Silva played only 18 minutes in the 43-point victory and finished the game with five offensive rebounds and one blocked shot.

Off the bench, Joel Ntambwe had nine points after going 3-for-4 on 3-pointers to go along with seven rebounds and Tyreek Smith showed his strength with four rebounds and seven points – including two monster dunks. Jamarius Burton would add four assists for the Red Raiders who finished the game with 22 assists on 38 made baskets and Chibuzo Agbo had five points with one 3-pointer and a putback with 35 seconds remaining to give Tech an even 100 points.

Jamaure Gregg led Northwestern State with 11 points while Kendal Coleman had eight points and 10 rebounds in the loss. Texas Tech is now 6-0 all-time against the Demons.

Texas Tech jumped out to a 57-29 lead at halftime by shooting 58.3 percent from the field and limiting Northwestern State to 33.3 percent overall and to 2-for-12 on 3-pointers. McClung led the Red Raiders with 12 points in the opening half, while Shannon had 11 points that included going 5-for-6 at the free-throw line. Santos-Silva led Tech with 10 rebounds and also had six points in his first half of action and Peavy had eight that started with the first basket of the season for the Red Raiders. Edwards was leading the team with four assists to go along with nine points and four rebounds as Tech took the 28-point advantage into the locker room.

Highlights? Yeah, there were a few. pic.twitter.com/TmCokBILFP