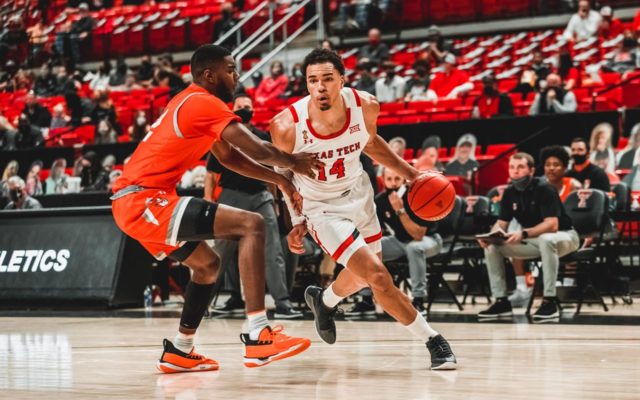 LUBBOCK, Texas – Texas Tech jumped out to a 26-4 lead and never looked back in an 84-52 non-conference win over Sam Houston State with Mac McClung going for 18 points and Marcus Santos-Silva dropping 12 points and 10 rebounds on Friday at the United Supermarkets Arena.

The No. 14 Red Raiders completed the sweep of Southland Conference opponents with its win over the Bearkats (0-2) coming after opening the year with a 101-58 victory on Wednesday. Tech now shifts attention to its game against No. 17 Houston (2-0) which is set for 4:30 p.m. on Sunday at the Dickies Arena in Fort Worth after a game against SHSU where 11 players scored and the team shot 50.0 percent.

“There’s an unselfishness and flow to our team right now that is fun to watch,” Texas Tech coach Chris Beard said.

McClung led the Red Raiders in scoring for the second straight game after scoring 20 in the opener after going 7-for-12 from the field with two 3-pointers, while Terrence Shannon, Jr. added 10 points, three assists and five rebounds in the win. Santos-Silva recorded his second straight double-double, scoring 12 points on 5-for-6 shooting from the field and going 2 of 2 at the free-throw line to go along with 10 rebounds. Kyler Edwards would add nine points after going 6-for-6 at the line, while Jamarius Burton and Nimari Burnett led the reserves with eight points each.

“That’s how we play, that’s Texas Tech basketball,” Beard said. “I’d like to think that’s our fifth year here and all our teams play like that, but these guys deserve that credit. No exhibitions, no scrimmages. It’s kind of a unique year and the way that they are playing right now you have to give them credit. There’s a flow right now. A trust factor. It’s early and we are about to get into the next part of our season with these two games against Houston and St. John’s. We’re going to learn a lot about our team through great competition.”

Through two games, McClung is leading the Red Raiders by averaging 19.0 points per game in only 20 minutes per game. He’s 13-for-21 from the field, 4-for-6 on 3-pointers and 8-for-8 at the line going into the third game of the season.

“There has been no surprises about Mac, he’s delivered,” Beard said. “He told me exactly what we could depend on him to do and he’s delivered. I hope he feels the same way about us. I believe Mac is playing the game the right way. He is trusting the offense, his teammates and himself.”

Texas Tech, which had only 12 turnovers, finished the game scoring 23 points off Sam Houston turnovers after forcing 18.

“Coach tells us when we get the rebound to run,” Shannon said. “I feel like we did a good job today, but it could be better. I feel like it fits my tempo also. That’s what he wants us to do and it’s working so that’s what we are going to keep doing.”

Texas Tech owned the first half, including going on multiple runs that was highlighted by a 16-0 run to take a 26-4 lead that was part of a 24-2 outburst. McClung led the Red Raiders with 13 points at the break and also had a steal that he converted into an and-one for the 43-15 halftime lead. Edwards added seven points at halftime, while Shannon had eight and Santos-Silva was at six points and five rebounds. Tech was shooting 53.8 percent from the field and had four 3-pointers in a half where Sam Houston was limited to 20.8 percent shooting, including going 1-for-7 on 3-pointers. The Red Raiders had committed only five turnovers through the first 20 minutes and had forced nine from the Bearkats.

“That was the game plan to start off, to be aggressive,” Edwards said. “Stay on fire. We knew they had a lot of good players so we wanted to lock in and key in on defense. I feel like we can be the best defense team in the nation. I think that’s our identity right now is being aggressive and tough on defense.”

EARLY TEST: The first game of the season away from Lubbock will be a highly-anticipated matchup within the state and nation with the Red Raiders playing Houston in Fort Worth. The Cougars are at No. 17 the AP Rankings and are picked to win the American Athletic Conference. They are coming off a 23-8 overall record and were 13-5 in conference play. The Cougars advanced to the 2019 Sweet 16 with wins over Georgia State and Ohio State in the NCAA Tournament before falling to Kentucky by four in the third round. Houston leads the all-time series against Tech with a 28-27 advantage, including an 82-69 win in the last matchup on Dec. 23, 2014 in Las Vegas to snap a nine-game winning streak by the Red Raiders over the Cougars. The programs first matched up in 1961 with the Red Raiders earning a 69-67 win in Lawrence, Kansas. Tech is 7-3 against UH in neutral-court games.