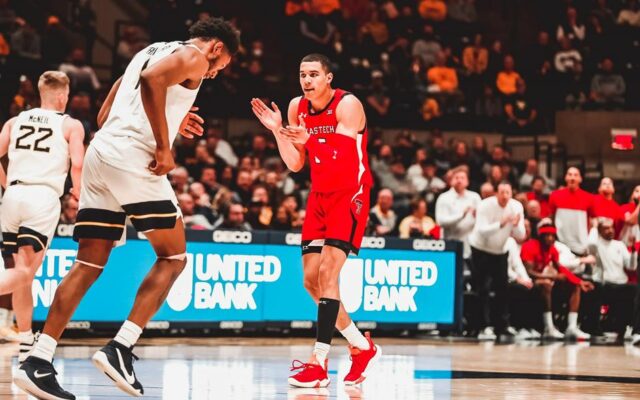 MORGANTOWN, West Virginia – Texas Tech senior Bryson Williams scored 10 of his 15 points in the second half and Kevin McCullar provided 10 points and nine rebounds to help lead the No. 14 Red Raiders to a 60-53 win over West Virginia on Saturday at the WVU Coliseum.

The Red Raiders (18-5, 7-3 Big 12) won for only the second time ever at WVU by holding the Mountaineers to 12.5 percent shooting in the second half and also extended a three-game winning streak that included a win over No. 23 Texas on Tuesday. TTU, which trailed 32-26 at halftime before turning up the defensive pressure, improved to 2-8 all-time at the WVU Coliseum while the Mountaineers (13-9, 2-7 Big 12) have now lost eight in a row.

“It’s a typical West Virginia game,” Texas Tech coach Mark Adams said. “They’re so physical, and they play so hard. We always respect coming here to this facility and this environment. We knew it was going to be a very tough game. History speaks for itself, and this is a very tough place to play. This is only the second time that I’ve won personally here in seven or eight years, so I know how tough it is. Some of these guys who have been here before knowing, too. Great win for us. It was ugly, but certainly excited and proud of our guys. These are the type of games you can build on, build character toughness from.”

Williams scored in double figures for the 11th straight game after going 5-for-15 from the field and 4 of 4 at the free-throw line. He was one of three Red Raiders in double figures in the game, joined by Davion Warren who had 11 points and McCullar who scored 10 points. Terrence Shannon, Jr. added nine points with seven in the second half, while Daniel Batcho scored six points and had a career-high four blocked shots. McCullar scored all 10 of his points in the first half and had two assists, while Mylik Wilson finished with a team-high three assists.

Tech finished the game with seven blocks with Batcho having his four, Williams adding two more and Wilson having one. Three of Batcho’s block came in the second half where the Red Raiders outscored WVU by a 34-21 margin. The Mountaineers were held to just 4-for-32 (12.5 percent) shooting in the second half, including going just 1-for-13 on 3-pointers against the stifling TTU defense.

WVU’s Jalen Bridges scored all of his team-leading 16 points in the first half, while Sean McNeil had 15 points. Gabe Osabuohien finished with 13 rebounds, eight points and five blocked shots.

“Their best player is hurt, and (fifth year guard Taz) Sherman is so valuable to this team, but those guys all filled in and played as hard as they could,” Adams said. “He was one that did that with those 16 points. He was a focal point in the second half to make sure we don’t let him get as many catches and looks at the basket.”

Tech went into halftime trailing 32-26 after shooting 37.9 percent from the field and just 3-for-13 on 3-pointers through 20 minutes. McCullar led the Red Raiders with 10 points, including the final five of the first half that included a 3-pointer with 30 seconds until the break to cut it to six. He finished the first half shooting 4-for-8 from the field and 2-for-4 on 3-pointers, while Williams had five points with one 3-pointer. WVU was shooting just 36.7 percent but had five 3-pointers, including Bridges going 4-for-5 and having 16 points at the break. McNeil added eight points with one 3-pointer to help build the six-point advantage. The halftime deficit was only the fifth time this season Tech trailed at the break.

“I was really pleased with the resilience,” Adams said. “Our guys came back after that first half and took control late in the second half and hung on to win.”

The Red Raiders will return to the court on Wednesday with a trip to play Oklahoma (13-10, 3-7 Big 12) at the Lloyd Noble Center in Norman, Oklahoma. The first matchup of the season between the two programs will be broadcasted on ESPNU. The Sooners are coming off a 64-55 loss at Oklahoma State on Saturday in Stillwater.

KEY MOMENTS
Second Half
Williams tied the game at 32-all after two free throws a pair of layups for a personal 6-0 run to start the second half… WVU stopped the run with free throws by Carrigan with 16:28 to play in the game
Shannon gave Tech a 35-34 lead with a layup and free throw with 15:42 on the clock… It was Shannon’s first basket since a dunk early in the first half where he had an injury that put him out of the rest of the first half
Tech took a 39-36 lead on a Williams layup before WVU tied it up at 39-all on a McNeil 3-pointer… Warren hit his second basket of the game for a 41-39 lead with 12 minutes to play
Warren pushed the lead to 44-39 with a 3-pointer with 11:45 on the clock… He had seven points after hitting Tech’s fourth 3-pointer of the game
Tech was on a 7-0 run and led 46-39 after a runner in the lane by Shannon with 10:21 remaining… Shannon would push the lead to 48-41 with a layup after WVU had slowed the run
Warren hit a layup and free throw for a 51-45 lead with 4:53 to play in the game… With the three-point play, Warren had 10 points and was the third Red Raider in double figures
Williams gave Tech a 55-50 lead after coming up with a steal that led to him getting and making two free throws… He had 15 points with the pair of free throws and was 4-for-4 on free throws while Tech was 9-for-10 at the line
Batcho threw down a fastbreak dunk for a 57-50 lead and then two free throws to make it 59-53 with 51 seconds remaining
First Half
Tech won the tip but missed its first shot of the game… McNeil hit a jumper for a 2-0 lead on WVU’s opening possession
Warren made Tech’s first basket on a layup on its fifth possession to cut WVU’s lead to 4-2
Tech trailed 7-2 at the first media timeout after starting the game 1-for-7 from the field
Shannon threw down a dunk to make it 11-4 but was injured on the play and left the game… Williams made a layup to make it a five-point game with 12:30 remaining in the half
McCullar and Williams hit back-to-back 3-pointers to make it 15-14 with 10:19 to play until the half.. Tech had started the game 0-for-6 on 3-pointers
Tech was on an 8-0 run and took its first lead after Wilson had a block on defense that led to a layup and 16-15 lead… WVU retook the lead and stopped the run on the other end with a Bridges layup
McCullar gave Tech a 21-20 lead going into the under-8 media timeout (6:44) with a jumper that gave him five points
WVU went on a 10-0 run for a 30-21 lead before a McCullar was credited with a layup that was goaltended… McCullar had seven points after the basket that stopped an 0-for-8 shooting stretch for the Red Raiders
McCullar drilled a 3-pointer for the final basket of the first half that made it a 32-26 deficit going into the break.